In first part, I thought about the intersection between abilities. Now, let's try a different spin: active and passive abilities. 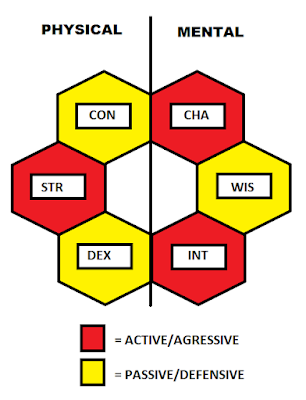 Check the first part to see why I chose this order of abilities; but, basically, Str relates to Con, that relates to Cha, etc.

The physical/mental divide is pretty intuitive.

A saving throw against your spell has a DC of 10 + the level of the spell + your bonus for the relevant ability (Intelligence for a wizard, Charisma for a sorcerer or bard, or Wisdom for a cleric, druid, paladin, or ranger).

This is pretty straightforward: Strength, Intelligence and Charisma are the more "aggressive" abilities, either trough attacks (Str), skills (Cha with deception, intimidation, feinting, etc.) os spells (Int and Cha). Dexterity, Wisdom and Constitution is the more "defensive" ones.

But there is some nuance.

While Constitution has basically only defensive uses, Dexterity and Wisdom may be used to attack. With some caveats: Dexterity does NOT get added to damage in 3.x, and Wisdom is used for some spells. And Strenght can often protect through armor - although it won't help you with saves or avoiding "touch attacks".

Now, the first thing we learn from this is: sometimes, you can safely dump TWO aggressive stats, provided ONE of them is good enough. And you can dump ALL THREE if you can use one of your passive stats to attack. However, dumping ANY defensive stat is dangerous, because you can choose how to attack your foes... but not how your foes attack you!

(Side note: people might be thinking "but what about skills?!" at this point. Well, most Int and Cha skills - knowledge, diplomacy, gather information, etc. - can be tackled by a single PC. Unlike, say, Reflex saves - if the whole group is hit by a fireball, everyone is rolling dexterity!)

This is the case for 3e. What about other editions?

For TSR-D&D, it varies, but there are hints of this. See the RC, for example:

Two things to notice: Wisdom is, "In the standard rules, the only ability score that can affect a saving throw"; and Charisma is the only ability that doesn't affect ANY saves even in the variant rules.

4e avoids the issue by making each PAIR of abilities enhance one save: you could use EITHER Str or Con to gain Fortitude, for example. While this sounds a good idea, it encourages you to dump one of each pair, making for somewhat non-archetypal characters. I would probably favor some kind of average instead. And IIRC you can use pretty much any ability to attack, depending on your class.

But my main concern here is 5e, the edition I have been playing recently.

Dexterity becomes a fully developed attack ability: you can add it to "to hit" and "damage" rolls, and Dexterity weapons are almost as good (or better, in the case of ranged weapons), than Strength ones. On the other hand, Strength protects you through armor, and you can use either ability to escape from a grapple.

Strength and Dexterity, then, become REDUNDANT: like 4e, if you have one, you can safely dump the other. Which creates the absurd situation that makes most fighters EITHER strong OR dexterous, BUT NOT BOTH.

5e also has SIX saves, one for each ability, but they aren't created equal; the three "defensive" abilities are used more often, but Strength is not far behind in fourth place. 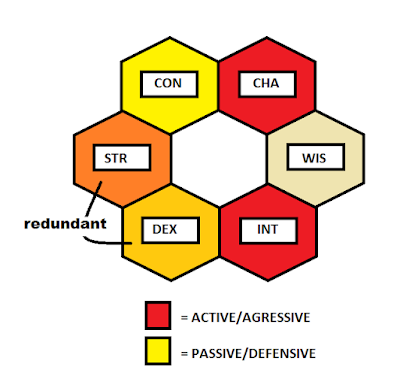 What can we use this for?

First, for home-brews and house rules.

In one of my games, I made a Int-based sorcerer that was really a "Tony Stark" tyep of cahrachter. An Int-based warlock would work too, or even a Cha-based wizard. Your druid is a Cha-based forest nymph or satyr? Sounds awesome to me! Str-wizard? Well, maybe, unless your trying to multi-class into fighter.

It is also cool to use an aggressive ability instead of a defensive one.

You might want your Cleric to be an Int-based religious scholar or a charismatic religious leader, and base your spell saves on Int and Cha.

Strength and Dexterity are mostly interchangeable. A Str-monk and a Dex-barbarian (with some caveats) are both easy to create.

In short: if you don't use this to intentionally break the game (which includes using this ideas to better multi-class), the game will probably not break by itself.

On the other hand, the opposite isn't necessarily true. You should avoid using Wisdom (or Constitution) to create an alternate version of the wizard, sorcerer or bard, or EVERYONE WOULD DO IT, since they would have one extra stat to "dump".

For example, if every sorcerer could use Wis, they would be able to dump BOTH Int and Cha.

Of course, if you're trying to give a boost to a certain class, that might be a good idea - I once seem someone suggest creating a Con-based Pact of the Blade Warlock to make the subclass stronger.

And, second, if you're planing on rewriting the game or writing your own, these idea might come in handy while you decide which ability to use in any given situation. For example: should Intelligence and Charisma be near-useless for a Cleric, os Strength a good dump-stat for a detrous fighter? And so on.

For me, personally, one idea comes to mind: each "pair" of abilities could be used in conjunction to defend or attack. BOTH would count, but you might choose one to count MORE.

See what Douglas Cole said in the first post as one possible example:


Douglas ColeJanuary 19, 2018 at 6:41 PM
One of the interesting things here, especially with 5e, is the concept I use in Dragon Heresy a bit, where quantities are based off of one raw stat plus the bonus from another.

For example, Charisma plus a Wisdom Bonus would be personality modified by perceptiveness, a good stat for bluffing and con jobs. Dexterity plus perception bonus is probably a better stand in for initiative.

So, potentially, you could use Intelligence to boost your Dex saves a bit, and vice-versa. Or Wisdom to give you a boost to Intelligence related skills. Maybe you are so fit that you can use your looks to deceive, despite your shy nature. Or very charismatic, courageous and iron-willed, despite desperately lacking wisdom and common sense!

Maybe even a Str bonus to skill, and dump the whole concept of "hit dice"? Everyone gets 1d6+Con+Str, or  1d6+Con+ some small bonus from Str.

All based on that original chart: 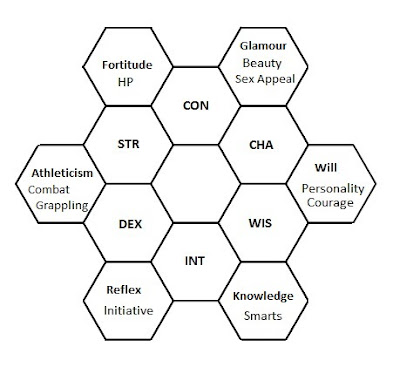 This allows for a greater range of archetypes (the thief isn't knowledgeable, but man he thinks FAST!) and also an useful boost to 5e saves at high levels.
Postado por Eric Diaz às 8:51 PM