I WANT it to attack me! Defenders, marking, and cover (5e quick fix)

Merry Christmas folks! And Happy New Year!
Just a quick fix I've been using lately.
When I have too many foes against the PCs (or too few) and I don't know which PCs get attacked, I've been letting the PCs choose when they could reasonably do so - by declaring they are trying to protect another PC or taking the front, etc. If there are more NPCs than PCs, usually everyone gets attacked, and the ones who choose to be in the frontline get attacked more often.
This alleviates some of the burden of running multiple NPCs in combat.
Intelligent NPCs that have motives to do otherwise can choose to attack the flank or rear instead.
If you play with miniatures, this is even easier to do; but I play mostly theater of the mind. Many RPGs tried to solve this issue: Dungeon World even has a specific "defend" move. The One Ringlet's you choose a  forward, defensive, open, or rearward stance - which gives you a bonus/penalty both to attack AND defend. D&D 4e had its "marking" etc. D&D 5e has some optional marking rules too, but I think you could even use the "core" rules to put yourself between an attacker and a victim. Other than that, there are "opportunity attacks" to insure foes do not walk pass the fighter to get to the wizard with impunity. 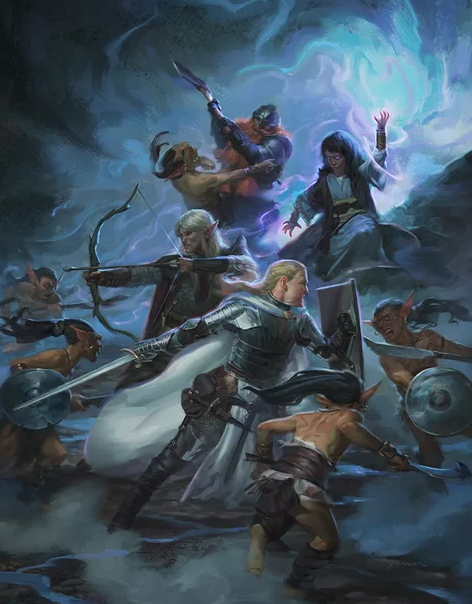 This feels organic to me - the bravest fighters will be attacked first, as it should be. It is also fictionally appropriate.
Mechanically, there are other ways to deal with that - make the attacker roll two dice, the highest one attacks the defender, the lowest one the defended. The interesting bit is that the defender is putting himself in significant danger. The downside is that it makes the defender EASIER to hit when the attacker is trying to get to someone else!
Maybe a better solution would be mixing the two - the defender serves as cover and, if the attack "hits the cover" (missing by 2 points, for example), then he makes another attack against the defender. Its the same rule I'd use for "shooting in the mêlée" - you can hit an ally by accident! Notice that even if you "hit cover" the defender might be unscathed - maybe because it was a glancing blow, or maybe the hit was absorbed by armor.
Mechanically, it feels perfect - hitting the intended target is harder, but the chance you'll hit SOMEONE is a bit higher.
(BTW, would we use half cover [+2] or three quarters[+5]? Maybe +5 when you're intentionally being the cover, +2 when unintentional. It opens interesting ).
Additional reading:
https://methodsetmadness.blogspot.com/2016/12/how-to-run-npcs-in-combat-days-of.html
https://methodsetmadness.blogspot.com/2021/09/should-monsters-know-what-theyre-doing.html
Postado por Eric Diaz às 1:53 PM