5-Minute Dungeon (and some D&D reflections)

This is not about RPGs. This is my first post (AFAICR) about a board game (that is obviously inspired by D&D and similar games). I'm not a specialist and I'll be brief.
5-Minute Dungeon is a fun cooperative game for 2 to 5 players. It is simple, fast (you're supposed to win/lose in five minutes, although we often ignore this when playing with children), and amazingly "balanced". 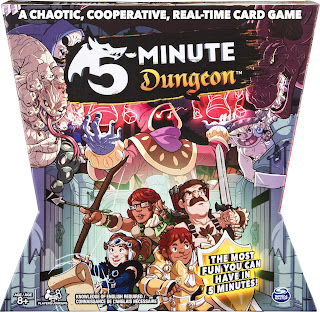 You have ten characters to choose from: Ranger/Huntress, Valkyrie/Paladin, Wizard/Sorceress, Barbarian/Gladiator, Ninja/Thief. The party has to face a series of challenges (mainly people, monsters, and obstacles, but also occasional events and mini-bosses) to get to the boss. If the boss is defeated within 5 minutes, you win.
Each pair has a customized deck that focuses on one special "skill" (basically melee, defense, ranged, spells and acrobatics), and some special cards that help them overcome challenges (for example, Wizard/Sorceress have a fireball card to defeat monsters, and Ninja/Thief have a Snipe card to defeat a person). Since pairs are printed on both sides of the same "base" (pictured below), you will not get redundant decks (there is a single green deck for Ranger/Huntress, etc.)
In addition, each character has a special ability which requires discarding part of your hand (usually, a to defeat people, monsters, obstacles, or to allow other players to draw cards, or stop time, etc.). 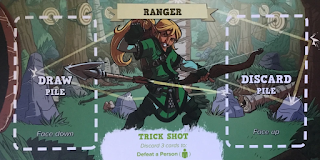 The abilities, cards, powers and colors (red for the martials, green for nature, yellow for the divine, etc.) feel thematically appropriate, and there is even a vaguely hourglass-shaped box to go with it. Lots of cool "Easter eggs", not only for D&D fans but also about movies, videogames, and internet memes (even some that children should not understand).
It made me wonder why D&D cannot get to this level of balance and straightforwardness. We could, for example, have fewer classes like 2e (warriors, priests, etc.) with sub-classes, each focused on a type of challenge - with some "deck building" to customize the classes (by picking skills and feats).
You see, 5e has three "pillars", supposedly: exploration, interaction and combat. If you think about it, it has also three environments: city, wilderness, underground. Combining them will give you different scenarios: fighting in the wild favors ranged attacks, since you can see your opponent from a distance, etc. There are also three main approaches to problem solving, basically sword, skill and spell. Then there are additional parts such as divine magic, psionics, etc.
One thing 5MD has that is lacking in D&D is the idea that magic cannot solve everything, leaving space for other types of characters to shine. For example, if you say spells cannot create food easily, but the ranger can easily forage when outdoors. Or that no spell is better at killing a single target than an awesome fighter with a sharp sword. A tough sell for some D&D players, but might be worth considering.
[D&D offers some solutions for that. For example, magic is available for everyone in the form of potions, magic items, etc. Spells are limited, so maybe having a thief by your side is useful if you face multiple repeated locked doors and chests. And 4e attempted to give PCs clearer niches and approaches - a worthy goal, even if the result didn't please me.]
Anyway, it's a fun little game, especially for playing with children ages 8+.
Postado por Eric Diaz às 8:01 AM