In parts one and two of this series, we mentioned the pros and cons of using a single d20 for task resolution in D&D. In this post, we will compare the use of a single d20 against 3d6 or other methods in a few problematic situations.

The main problem with using the d20 in D&D comes when you try to roll to compare characters' traits. Mind you, this isn't a problem for all editions, nor is it unsolvable, but it is persistent enough to be worth discussing.

First of all, there is usually little need to use the dice in order to compare characters' traits. Whoever has the biggest STR is the strongest, and so on. You may also force the characters to take 10 and be done with it.

If you decide to use the d20, though, the result might be less than satisfying. 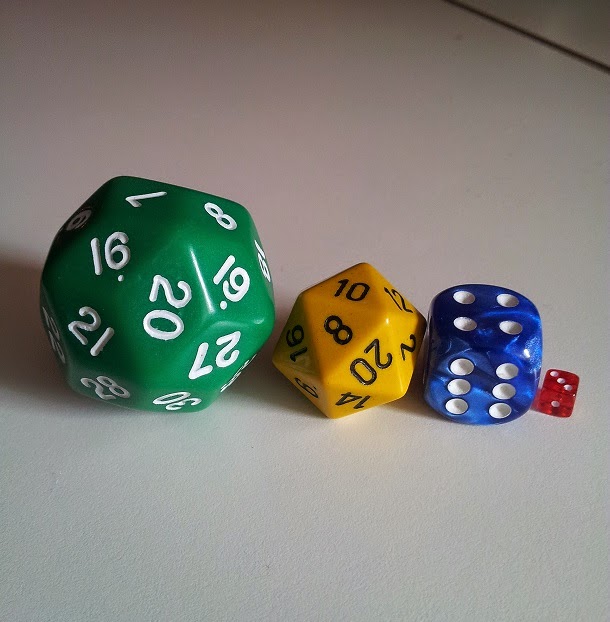 Let's take the d20 SRD as an example:


Opposed Checks
An opposed check is a check whose success or failure is determined by comparing the check result to another character’s check result. In an opposed check, the higher result succeeds, while the lower result fails. In case of a tie, the higher skill modifier wins. If these scores are the same, roll again to break the tie.

Sometimes a character tries to do something to which no specific skill really applies. In these cases, you make an ability check. An ability check is a roll of 1d20 plus the appropriate ability modifier. Essentially, you’re making an untrained skill check.
In some cases, an action is a straight test of one’s ability with no luck involved. Just as you wouldn’t make a height check to see who is taller, you don’t make a Strength check to see who is stronger.

So, as we said before, you wouldn't make a Strength check to see who is stronger. That makes perfect sense. For example, someone with STR 15 can carry twice as much weight as someone with STR 10, so she's obviously stronger (arguably, about twice as strong).

But what if these two characters face the same challenge? What if some luck or risk is involved? Say, both of them must climb a wall that requires a roll of 10 or more to succeed. If they have identical skills, they get to add their STR modifier to the task, so STR 10 adds +0 and STR 15 adds +2. If you compare their odds, you'll see that. about 20% of the time, the weaker character will succeed while the stronger character fails, while the opposite will happen about 30% of the time, and they will have the same result (as far as success/failure is concerned, although margins will vary) about 50% of the time.

And there are a few situations where rolling to see who is stronger might make sense. If a mighty warrior (say, STR 20) is arm-wrestling the king of Demonland (STR 25) in order to negotiate a peace treaty, just saying "the stronger character automatically wins" is very anti-climatic. But if you roll an opposed check, the king of Demonland will win only 61.25% of the time (supposing that draws go to the character with the higher ability).

Strength is the easiest example, but a score of 15 has been considered noteworthy in most editions of D&D - not only for STR, but for any ability. The chance to roll 15 in or more in 3d6 is less than 10%, so it must be a bit unusual. Even in the editions where STR is more linear (STR 15 will represent 1,5x as strong as STR 10, for example), is hard to argue that an ability of 15 shouldn't be much relevant.

Now, if you invested heavily in an ability (or got a lucky roll), would you expect to lose to an ordinary person 40% of the time? How often would you expect to be beaten by someone who is half as strong, half as smart or half as quick as you? Not that often, I would say.

There are multiple ways to solve this.

Rolling a d20 under ability makes things somewhat better, but not much, and it has the disadvantage of having a hard limit (no arm-wrestling against the STR 25 king without needing additional rules, for example).

Using 1d6 for skills and adding modifiers is even better for the mightier character. Rolling 2d6 will also work. As it often happens, there are classic solutions that work better than many of the things that came later. All this methods were used in older editions of D&D.

But all this solutions will add extra mechanics to the mix, where you could be using something more similar to the traditional combat system, like 3d6+modifers. It is close enough to 1d20+modifiers that you can use similar target numbers, and you might even use both interchangeably (rolling 3d6 when the characters' actions are slower and more predictable, and 1d20 when she's taking risks). It is also closer to the way abilities are generated. It is still very "swingy", but a lot better than 1d20.

At this point you might ask why don't just use 3d6 in combat as well. The answer is quite simple: you could, if combat was made of a single roll.

If you roll 1d20 and BAB (or THAC0, or whatever) for both sides, the fighter with +5 BAB will get beaten by the wizard with +2 BAB quite often. But since a fight is made of multiple, repeated rolls (even if we ignore different tactics, weapons, armor, hit points and so on), the chances will soon get stacked against the worse warrior.

When you compare the odds, using a d20 in situations where you must roll multiple times (say, during four exchanges) isn't much different than rolling 3d6 only once, which makes things a bit more consistent.

More important than the particular methods I use, though, are the results I'm trying to get:

- An outstanding ability score matters.
- If a character has an awesome trait, she will seldom be defeated by ordinary folk using the same trait.
- And if a character is fighting extraordinary opponents, much better than himself, he cannot count on luck to save the day; better come up with a clever plan instead.

Which happens to be the way I like to play.