Watching the D&D Cartoon - part I

In a recent fit of nostalgia, I started watching the D&D cartoon all over again. I really liked it as a kid and, although it seems a bit dated now, I had some fun seeing it again and remembering some curiosities that I hadn't realized at the time.

I am aware there are quite a few people that were already playing D&D for a long time when the cartoon came out, and some of them were appalled by it, but that was not my case. I watched the cartoon before I started playing RPGs (for completely unrelated reasons as far as I can remember), but I was interested I all things related to fantasy and sci-fi.

To be honest, I think I have been quite a sucker for animation for quite a long time. It feels like a natural media for fantasy. When I was a kid, I was very fond of both The Hobbit animated film (even after reading the book) and The Black Cauldron (never read the book, it is probably way better than the movie), and loved lots of movies from Ralph Bakshi, specially Wizards and Fire and Ice. It took me a while longer to get to know Record of Lodoss War and masterpieces such as Akira and Princess Mononoke, but I loved them all.

If you haven't watched the D&D cartoon, the series are about a group of kids (ages 8-15, supposedly) that get magically transported to the world of D&D. It is very much a children's show, and from the 80s... If you think you can dig this type of stuff and you play RPGs, I suggest you take a look to see what you think. 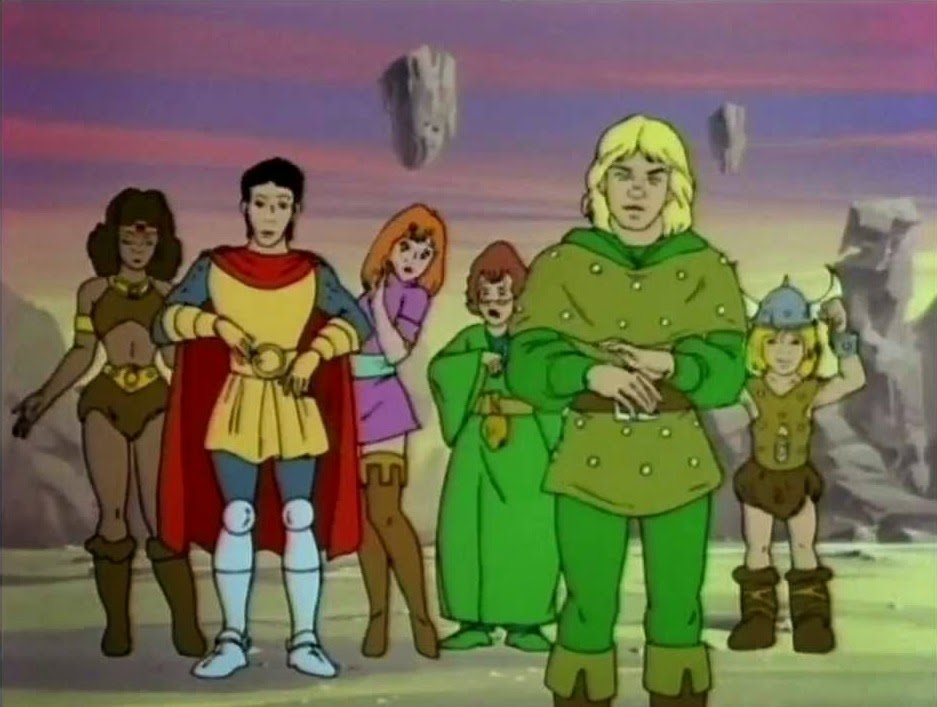 Here's a few things I noticed in the first couple of episodes (and by looking around on the internet).

- The show was developed by Mark Evanier, the writer of Groo the Wanderer, of which I'm a huge fan.

- It came out in 1983. At this point, besides OD&D, Greyhawk, Blackmoor, etc, we had both AD&D and Moldvay's B/X lines, so there was a lot of material to draw from already.

- There aren't many original classes among the main characters… We got the barbarian, the acrobat, the cavalier, the ranger, the magician, and the thief. No fighter or cleric, and the magic user is called magician. No monks, paladins, or assassins either (the last one for obvious reasons - the series is for kids after all). Shannon Appelcline, in his book Designers & Dragons:The ’70s, has a very interesting bit on the the topic:

"The inclusion of the acrobat, the barbarian, and the cavalier is odd too,
because they were all brand-new classes, written up by Gary Gygax for Dragon in
1982 and early 1983. It makes one wonder if Gygax wrote up the classes because Marvel wanted some more variety or if he pushed his newest creations on them".

In any case, it is nice to see that classic D&D classes such as the cavalier and the thief being used instead of more popular archetypes such as “knight” or “swashbuckler”.

- Interestingly, no magical swords either. Magical swords were some of the most potent items in OD&D (and mythology, and fiction), but the heroes don't get one here.

Episode 1 - The Night of No Tomorrow

- The characters begin the episode in a mountainous wasteland. Pieces of rock float through the sky. Later on, they travel among strange, spiky trees. I like how the scenery always remind you that they are in alien territory. Even though they see signs written in English…

- Merlin is in the first episode. Or is he? Anyway, Arthurian folklore seems a bit out of place here, like the aforementioned signs.

- On the other hand, they end up into a “dungeon”… kind of. They got lost in a castle in the sky, I guess that counts. And there are plenty of dragons around. Including Tiamat. Which is cool.

- There is a village of little people on the episode. I thought they were dwarves, but it turns out they are gnomes.

Episode 2 - Eye of the Beholder

- Once again, the characters start the episode in fantastical scenery, this time a desert with four suns. They soon face a giant scorpion and a blue dragon, that end up turning on each other. It reminds me a bit of The Abominations of Yondo, from Clark Ashton Smith.

- Another village ruled by a mayor. This one looks human. Apparently, they hire knights to protect them. An interesting twist on knighthood...

- We (obviously) get too see a beholder in this episode, with energy rays and all! Nice to see original monsters from classic D&D on the smallscreen. Also, some cool snail people.

- The knight in this episode also doesn't have a sword. Maybe they wanted to avoid sharp objects in a children's cartoon?

Even after all this time, I enjoy it, although nostalgia certainly plays a part. Somehow, the first couple of episodes seem quite effective in weaving D&D's multitude of influences in a coherent narrative. And, of course, they are far better than the D&D movies.