When a Fighter reaches level 9th in some of the "classic" editions of D&D, he may become a leader of men. Here is how Daniel Proctor's Labyrinth Lord puts it:

Reaching 9th Level: At level 9 a fighter may become a great leader of men, taking control of a parcel of land and a leadership rank in his society. A fighter will, assuming money is at hand, build a castle. He may ultimately control several villages and towns, but must be a good, strong leader and provide protection.

That isn't an aspect of D&D I haven't explored much in my games. I think most of my players prefer adventuring over managing parcels of land unless we're playing a "noble families" campaign, and building castles never sounded as much fun as taking them.

Andre Norton's short story The Toads of Grimmerdale, one of the most "D&Dish" things I have read recently (even compared to some other books in appendix N), has this interesting bit: 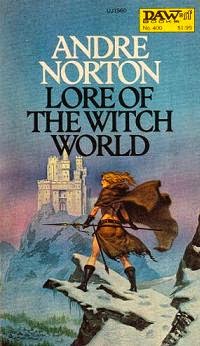 “It is in my mind that Nordendale needs a lord, one to give the people heart, rebuild what man and time have wasted. I have come north seeking a chance to be not just my own man, but to have a holding. I am not like Urre who was born to a hall, and drinks and wenches now to forget what ill tricks fortune plays.

“Who my father was—” he shrugged, “I never heard my mother say. That he was of no common blood, that I knew, though in later years she drudged in a merchant’s house before the coming of the invaders for bread to our mouths and clothing for our backs. When I was yet a boy I knew that the only way I might rise was through this—” he touched the hilt of his sword. “The merchant guild welcome no nameless man, but for a sword and a bow there is always a ready market. So I set about learning the skills of war as thoroughly as any man might. Then came the invasion and I went from Lord to Lord, becoming at last Marshal of Archers. Yet always before me hung the thought that in such a time of upheaval, with the old
families being killed out, this was my chance.

“Now there are masterless men in plenty, too restless after years of killing to settle back behind any plough. Some will turn outlaw readily, but with a half dozen of such at my back, I can take a dale which lies vacant of rule, such as this Nordendale. The people there need a leader, I am depriving none of lawful inheritance, but will keep the peace and defend it against outlaws—for there will be many such now. There are men here, passing through Grimmerdale, willing to be hired for such a purpose. Enough so I can pick and choose at will.”

By the way, if you haven't read Andre Norton yet, you probably should. Her stories have everything: old ruins, ancient alien gods, clerics of lawful religions, dark pacts (with nefarious consequences), saving throws, war, tragedy, adventure, multidimensional characters... and many things that might make you eager to play a 9th level fighter, or any number of different characters.
Postado por Eric Diaz às 8:54 AM