Here's is my new post, it's just like the old post… but using d10s instead of playing cards. I've decide to reproduce most of the material to to make reading it and referencing it easier. To save you the trouble of reading it all again, I've put the most important of the “new stuff” in italics. So, if you want to see the whole picture, read it all. If you've read the previous article, you might want to read the italics only.

The idea behind this system is that every combatant is trying to find a good moment to attack (or act), and faster characters get better opportunities. The goal is making things unpredictable, dynamic, and tactical.

In the begging of each round, each player rolls a d10. Rounds last for about 10-15 and are divided in 10 segments, each one lasting about a second. Characters who roll a 1 act on segment 1, and so on. Every action has a duration in segments, usually 4.

Immediately after taking your action, roll another d10. If the new number is equal or higher than your number card plus the duration of your action, you can take an extra action in this round (when the segment corresponding the new number comes up). If it isn't, you can keep the new number for next round, if you wish. For example, if you played a 4, and took an action with a duration of 5 segments, you can act again if you draw a 9 or 10.

If you roll the exact same number of the segment you're in (another 4, in our example), you can choose the result you want. Manually set the new dice to the chosen segment - segment 9, for example.

No more than three actions can be taken each round, which can be managed by looking on the number of dice in front of each player (so, everyone should set apart three d10s for this sole purpose) .

There is no problem in finishing an action on segments greater than 10 (this "extra segments" are somewhat abstract), and it doesn't affect next round, but your last action cannot finish in a segment greater than your first dice plus 12. Thus, if the first number you rolled is a 3, you cannot start an action in segment 10 that takes more than 5 segments.

When a new round begins, everybody rolls a new dice (the ones who kept a dice from the last round may chose which one to keep), and so on.

Although this looks like a "second-by-second" breakdown of the encounter, it involves quite a bit of abstraction to make things run smoothly. Because of that, you resolve each action on the segment it begins, although it can be interrupted in the middle.

And… that is it, basically. You can use or ignore the optional rules below, depending on the system you're using or the effects you're looking for.

Weapons: 4 segments for a "medium speed" weapon, 2-6 for other weapons (2 if unarmed, or if you have a longer weapon than your opponent and hasn't been hit by him yet). Bows twice the time to draw and shoot, crossbows take half the time to shoot and twice to draw.

The GM will decide on the duration of other actions.

You can add a simple, quick action, such as taking a single move or drawing a blade, to other, more complex, actions. Just add the durations. The GM has the final word, but the idea is that if no dice are rolled because of your action you don't need to use an additional card. For example, you can move and attack, although you have a good chance of being interrupted in the process (see below).

To delay an action, when your segment comes up say you'll wait for something to happen - an attack on yourself or an ally, a move by an specific opponent, etc. If that happens, you can act on any given segment after that. If you rolled a 2, and act on segment 7, for example, you action may end on segment 11. If you don't want to declare your action right now, you can roll and extra die, as if you had just taken a 1-segment action.

Likewise, actions can be changed at any time before they are finished, but the change takes one segment (so, if you change your mind on segment 6, you can act on segment 7, without rolling an extra die).

You can interrupt an enemy if you can finish an action before him. You must declare this the moment the opponent declares his action. For example, if he attacks you on segment 4 with a two-handed axe (speed 6), he will hit you on segment 10. If you act on segment 5, you can hit him with a knife before that. Even if he survives the attack, enough damage (let's say, 10% or more) can cause an ill effect. Some suggestions: spell interruption, -2 penalty to a roll, movement is halted, etc.

You can use you interruption to defend yourself or an ally. This depends on the system you're using. One example: a parry grants +2 AC.

Interrupting is about disrupting your enemy's action. You cannot simply walk away in the middle of an attack. 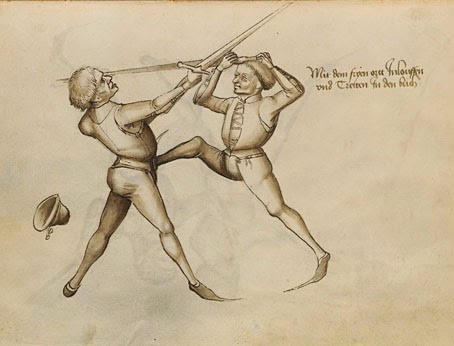 If it matters at all, give them to whoever started the action first (in the event of interruptions), or flip a coin.

Surprised characters roll no dice in the first round.

DEX mods apply only to the first die you play. If you have DEX +2 and your first roll is a 5, manually adjust it to a 3. If you roll a 1, the bonus is useless unless you use the option below.

Another option is to let players roll one extra die for each +1 in the beginning of the round, choosing the best and discarding the rest.

If a character has multiple attacks, he may take all his attacks in his turn. Depending on the edition you are using, you can use special cards or specific suits to represent additional attacks instead, although exact balance becomes difficult.

When using playing cards, we suggested adding some special effects to specific cards. If you like the idea, you can assign special effects when two identical number are rolled. The first effect, as we've said before, is allowing you to act in any segment. Other effects that can be chosen randomly or by the player are:

IN CONCLUSION... WHAT'S THE POINT?

Because the best course of actions depends on the d10, circumstances change from round to round. This forces you to be a bit creative instead of using the same attack round after round. Some of the effects I expect to achieve:

- With the dice on the table, initiative is easy to track.
- Everybody can act every round, and some people will act more than once in some rounds, but not too often.
- No additional rules needed for fighting with two weapons, opportunity attacks, etc.
- Things such as kicking an opponent before striking with your sword, throwing a dagger at a wizard in order to stop his mighty spell (because otherwise you cannot reach him in time), moving cautiously toward an enemy, using low-levels spell at high levels, waiting for your adversary to act first, and trading defense for offense become viable tactics.

There is no big difference between the systems. The d10 makes it easier to physically adjust the segments, but I think playing cards make things easier to track and avoids accidents (such as one die bouncing on another). Since many people would object to adding playing cards to D&D, I've adapted that system to a more traditional d10 system, reminiscent of AD&D - that is where I got my inspiration in the first place.
Postado por Eric Diaz às 2:43 PM