Check Part I and Part II.

How would GURPS-D&D combat play out?

First, combat is a skill like any other, but it is ROLLED differently. Not because it is a special skill, but because combat is a special situation that requires multiple repeated rolls. Want to enter an archery contest? That is 3d6 (or 4d6, 5d6) under skill. Combat? A d20 all the way.

A natural 1 is a critical hit, by the way. And let's get rid of some of the most stupid rules of GURPS (critical hit tables with "nothing happens" as the most likely result) and D&D (the 3.x "confirming criticals" idea) while we're at it. Funny how those rules are similar, right?

Should we use DEX or STR for combat? Both are fine by me. I'd prefer using DEX "to hit" and STR for damage, including missile weapons, as in GURPS. The idea that you should be using a rapier or longbow if you're weak makes no sense to me! And, as you've seen in part II, combat is mostly skill in this hybrid system, so a low-DEX high-STR fight can still work very well, specially with a d20.

Aside from using a d20, combat is roll-under like everything else. Roll under DEX/2+Fighter (or Barbarian, Monk, etc.) and you hit. Active defenses (dodge, parry, etc) deserves another post.

Forget AC; in GURPS, armor means damage resistance (DR; for example, DR 2 reduces 5 points of damage to 3 points of damage). You don't even need the book; DR is 2/4/6 for light/medium/heavy armor. Flexible armor is easier to don and hide under clothes, but has half DR against crushing attacks. Weight is 15 pounds per point of DR, cost is $300/$1000/$3000.

By the way, the paragraph above fixes one of the most annoying aspects of GURPS: it doesn't have "complete" armor sets in the core book. You must buy armor separately for the torso, legs, arms, etc. You can still use the original method if you prefer more detail.

GURPS equipment is in some ways more interesting than D&D equipment, and GURPS Low-Tech is a thing of beauty if you're looking for detail. But even in the core rule book you've got rules for obsidian blades, different weapons against different armor (no table needed!), and so on. 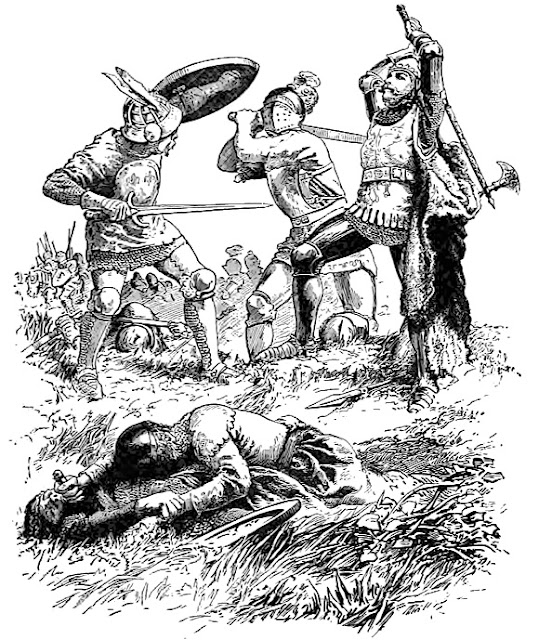 GURPS does have a few interesting twists when it comes to weapons. Basically, stronger characters are more efficient with axes, maces and other "swung" weapons, while weaker ones would better use spears and arrows ("thrusting" weapons). Some swords and pole-weapons have both options! Nice, huh?

But probably too complicated, and you still need a table to find your damage. It is not a difficult one to use, but I'd rather avoid it.

Let us make it simple: just give an WotC-era bonus to damage (+3 for Strength 16, for example), but DOUBLE the bonus for swung weapons (do not double the penalty for weak characters!).

You can still use damage from your favorite D&D edition (1d4/1d6/1d8/1d10; save the 1d12 for halberds only). It works better, and polyhedrals are more fun, right?

GURPS have lots of "realistic" rules for maximum damage, minimum Strength, etc., but they can simplified to this: you cannot have a bonus greater than the dice you're rolling (so, a 1d4 weapon deals 1d4+4 damage at most). If you want to enforce minimum strength, you need Strength 4 to use 1d4 weapons, Strength 6 to use 1d6 weapons, etc.

It also has this cool little rule where cutting/piercing damage that penetrate armor gets a bonus. Piercing weapons DOUBLE that damage (for example, 10 damage, minus 2 from armor would be 8 damage, but 16 if the weapon is piercing). Cutting weapons add 50% to damage after armor. It is easy once you get the hang of it, I promise.

This means a barbarian with a halberd and Strength 20 (assuming 22 as a maximum) deals 1d12+10 damage, plus 50% of any damage that penetrates armor. Which - surprise! - very similar, in average, to the damage he'd deal using GURPS unadulterated rules (3d+7)!

These rules seem simple enough, but cause lots of interesting effects:

- Certain weapons are better against certain types of armor by default.

- High DEX and high STR Fighters are BOTH feasible, but they FEEL different in play. Unlike 5e D&D, for example, high DEX characters hit more often, but deal significantly less damage per hit.

- The result is both more "realistic" than D&D and more fun than GURPS. Which, come to think of it, might be the whole point of this exercise: making combat faster and more fun, while still giving plenty of meaningful tactical choices to warriors.
Postado por Eric Diaz às 9:11 PM