Read parts I, II and III before, if you prefer.

So, active defenses. In GURPS, unlike D&D, if an enemy hits you, you can still dodge or parry the blow. It makes a lot of sense; having a parrying weapon or shield is useful, but it can break, and parrying a blade with your arm is certainly going to hurt you.

Like everything in GURPS, you must roll under a target number to succeed. This target number is usually much lower than the "attacking" skill, making attacks usually better than defense. Which makes sense; combat would take forever otherwise.

In fact, sometimes it feels that combat DOES take forever in GURPS. If your Dodge score is 12, for example, you must roll under 12 (with 3d6) to succeed, which means you can ignore 75% of the attacks that hit you. 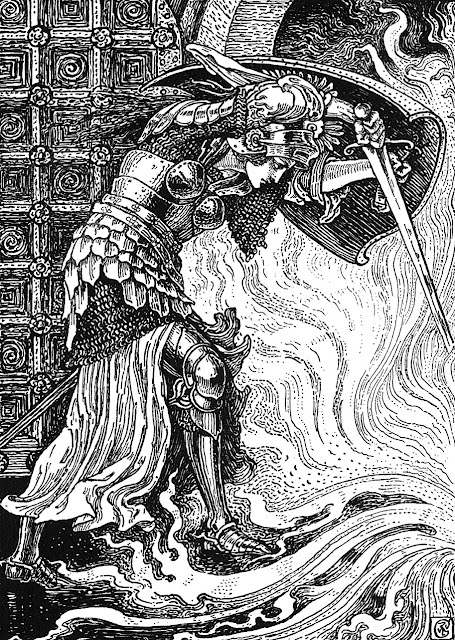 The concept of "active defenses" is not that different from D&D saving throws.

Curiously enough, spell saving throws DON'T work in the same way in GURPS. At least not necessarily; a magic projectile is still an attack and can be dodged (the sorcerer must roll two times; once to "create" the projectile and the second to hit the target, and then the target rolls to dodge), but a mind controlling spell, for example, requires the target to roll 3d6 under his Will score (with 3d6) AND beat the sorcerer's margin of success, which isn't required when you dodge.

There are half a a dozen additional rules to make it more complicated (critical hits don't allow defenses, special maneuvers can increase or lower the defense scores, a defense of 3-4 always succeeds and 17-18 always fails, the rule of 16, etc), but that's the gist of the thing.

Why does this need fixing? Because it is too complicated and generates lots of useless rolls.

How do we fix it? Unify and simplify.

Fortunately, using a d20 in a roll under system (like suggested in the previous posts) make things really easy: just use a blackjack mechanic.

(I've written about similar subjects before, here and here; also, Pendragon does something similar IIRC).

First, defenses. Forget GURPS; now defenses are half attribute + skill, like everything else. Obviously, you can defend with any weapon you can use, but "general" defenses should be easy to come by. In my own game, Days of the Damned, I created a "Survivor" skill that applies to, basically, all defenses but combat; we could probably do the same here.

Now, the combat procedure. Roll 1d20 under you skill. If you fail, well, you fail. If you succeed and roll over your opponent's skill, you hit. Otherwise, you opponent gets a chance of defending, but he must roll under his skill (as always) and OVER your skill to defend.

Spells? Exactly the same. ONE roll to cast the spell, and one roll to defend (at most). Don't worry, we will talk about spells eventually.

If you want EVEN LESS dice rolling just divide the skill by two for one of the sides, instead of rolling.

Say, if you want an attack roll but not a defense roll in your games, the skill 17 attacker will hit an skill 12 defender with any number between 6 (i.e., 12 divided by two - although a 6 would be a tie, and ties go to the defender) and 17.

Likewise, if you prefer the PCs to make all the rolls, NPCs always divide their skill by 2 instead of rolling.

It seem that, sometimes, combining two games can create something that is simpler than either of them.
Postado por Eric Diaz às 8:53 PM