Should we trust MIKE MEARLS on 5e D&D monster math?

So Mike Mearls‏ tweeted this: 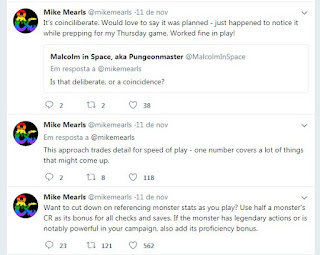 Want to cut down on referencing monster stats as you play? Use half a monster's CR as its bonus for all checks and saves. If the monster has legendary actions or is notably powerful in your campaign, also add its proficiency bonus.

Needless to say, Mike Mearls‏ did an amazing job with 5e, so he must  know what he is talking about.

And, honestly, I take Sage Advice (and pretty much everything that Mike Mearls‏ and Jeremy Crawford tweet) almost as canon. They made the game, after all, and have some amazing insights on it.

Unfortunately, this particular tip makes seems to make no sense when compared to actual 5e numbers.

If you follow he link to the tweet, you'll see an user named Dylan ran the numbers and got some very interesting results... some of which I don't fully understand.

I don't really tweet, so I can't participate on the conversation directly, but the subject interests me.

In any case, I wanted to make a quick check myself. 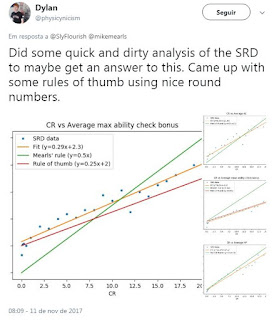 Let us take the first monsters in alphabetical order, from here:

Aboleth (CR 10) - saving throws are Con +6, Int +8, Wis +6, plus Dex -1, Str +5, and Cha +4. Average +4.6. Pretty close to half CR... however... it has legendary actions, so you'd add proficiency bonus, making its it rolls ALL the checks and saves at +9. Comparing this to the monster's actual dexterity save, at -1 shows it is absurd - but +9 is also twice the size of the average saving throw. The aboleth also has only two skills - for everything else, the bonus would be way lower than +9.

So, yeah, as written, the original tweet does not work very well.

Is there a good formula?

As you know, the DMG has a (hidden) formula for attacks, AC, save DC, HP, damage, etc. (a formula that the MM doesn't actually follow very well, but this is another topic), but not for saves and checks.

Dylan has suggested some. I don't have access to any compiled monster database (please send it to me if you do!), nor am I a mathematician, so I cannot really criticize his work.

But, from my experiences and (limited) number-crunching, I'd guess that for AVERAGE checks, the bonus should be equal to proficiency bonus (i.e., 2+1/4 CR). I think Dylan suggests this for "max ability check bonus", so I'm not sure he takes saves into consideration.

Using the proficiency works well enough for the Aboleth and Adult Black Dragon. It doesn't work well for the Acolyte or Air Elemental - here Mike's formula is better. It seems Mike's suggestion is better for low CRs - at least in this VERY LIMITED sample.

Next creature in line (skipping the Dragons) would be the Androsphinx. Average save about +8 in reality, checks would probably be lower, +6 if you use proficiency, +14 (!) if you follow Mearls.

The best part, though, is that there is a pretty intuitive (and somewhat accurate) way of combining all the formulas.


You could be even more precise (and still intuitive, I think) by allowing some small variation (use the second number after CR 4):


The DM gets to decide what the monster is good, average and weak at. Assume EVERY monster is good at attacking, AC and save DC (after all, all characters will use their best stats for such things).

How does it work for the actual monsters studied here?

Aboleth (CR 10): if the DM assumes the Aboleth to be good at Intelligence and Wisdom, it would have +7 to saves and checks with those abilities. Dexterity being its worst check, a +2 bonus (instead of -1). Average stuff? +4. Quite similar to the actual numbers.

We could try other examples, but without an actual compilation of data we would not get very far.

So, there you go: if you have a rough idea of the monster's strengths and weaknesses, you can intuitively guess the numbers involved, with some degree of precision.

The fact that you can just google any monster makes this exercise a bit superfluous. But if you have to come up with some numbers on the spot, or create your own monster, this little formulas can be very helpful.
Postado por Eric Diaz às 6:24 PM