Take a look at this great post from Cruel & Unusual Punishment:

[...] I don’t appreciate the lack of tactical variety arising from combat with foes drastically larger in size than player characters.
This is not about pushing an agenda that large creatures should by rights be tougher to beat, rather that, as a challenge, they should feel different and require a distinct approach rather than the mended old hat of getting the cudgels out and whacking away at the ankles of the Hp piñata until it keels.
[...] In DnD all that is absent: the gameplay surrounding combat with large monstrous opponents mostly plays like Times New Roman twelve, wrong-headedly reduced to a slugging match with a large juicy bag of Hit-points saddled with a bad action economy, leading to the mechanical juncture of monstrous foes, due to being single targets, being actually easier to face than an equivalent challenge made of multiple smaller ones (the DMG’s guidelines on CR copping admission to this very fact). Occasional legendary and lair actions feel like just a tacked-on mitigation device.

To be honest, while I like 5e, I am a bit disappointed about bounded accuracy going too far - a tribe of goblins should be a bit weaker, I think, and the tarrasque A LOT tougher.

It bothers me that "the most dreaded monster in the Material Plane" feels a bit like it could be taken down by a hundred determined, well-positioned 1st level fighters with the Sharpshooter feat (no, I have no idea how accurate this is).

And I like the idea that armor might be less useful than Dexterity against huge foes - although I wouldn't want it to be completely useless, since Dexterity is already a bit better than Strength in 5e as it is. 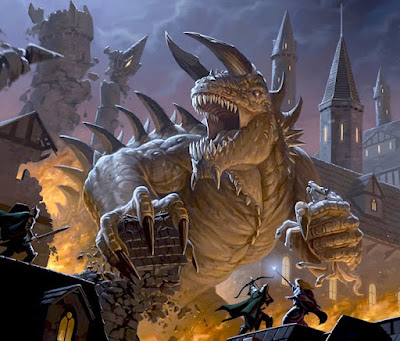 So, if you want to know his solution, click the link above.

Here is mine - largely inspired by his, but a bit simpler.

A sufficiently large rock, piece of rubble or weapon hurled by the creature might have a similar, but smaller and rarer, effect (GM's call). Likewise, a large creature with a big two-handed weapon can occasionally deal damage in the same way.

In short, if an angry mob of villagers decides to take down a giant, they are going to have a bad time. Godzilla is coming? Better bring out the big guns.
Postado por Eric Diaz às 3:22 PM