As you might know, Dark Fantasy Basic is my vision of how a dark D&D (BX/5e) would look like.

But why do I call it DARK? I do mention this in the FAQ:

Some people have said this is a cop out. Fair enough.

I intend to add more "dark" stuff as I go. But the DFB Player's Guide has ALREADY included many things that I consider that reinforce the "dark fantasy" theme.

Here is a small list that may be useful if you're trying to add "dark" elements to ANY version of D&D, or other RPGs.

- Magic is dangerous! DFB treats magic as any other skills - roll against a DC (10+spell levelx2), but with a caveat - fail by 10 more and the spell might turn against you, drain your strength, cause mutations etc. Magic "fumbles" are the worst fumbles of the game. You can cast spells WAY above your level.. but that is asking for trouble! 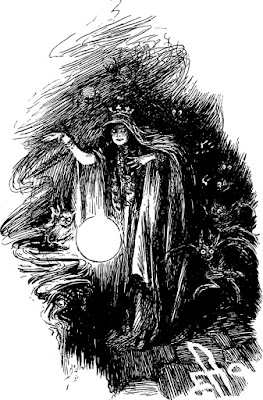 - Nonhumans are mysterious! I made the player's guide human-only; nonhumans should mostly be monsters (and I plan to mention humanoid monsters in monster's books in the future), I think, although I'm not sure many people would enjoy D&D without demihumans (and, it seems, wouldn't work very well for your setting), so I added a few options.

If you're adding elves and dwarves to your dark fantasy games, better make them rare, mysterious and, preferably, utterly alien.

- Alignment isn't black and white! I prefer Chaos/Law instead of Good and Evil (well, good and evil are black and white after all), but I take a Moorcockian, not Andersonian, view of these forces. No good/evil axis on my game. Many evil foes think themselves to be good...

- The gods must be crazy! Deities are unreliable, and followers too. If a paladin "falls", he doesn't lose his powers, and chaotic deities can give you spells if you bargain for it.

- Sacrifice! I don't think being "deadly" is necessarily a mark of Dark Fantasy. This is a common misconception - dark fantasy heroes do not die like flies, nor must they be foolish or weak. I love DCC's funnel, but dark fantasy, IMO, is more about sacrifice than random death - so characters should have some CHOICE about fighting to the death. Basically, they can fight past 0 HP, but this is incredibly risky.

There are other things that can make a game of D&D "dark", but these aren't in the DFB Player's Guide:

- Monster are strange! Each monster is unique. If you encounter an orc after another, or small groups of identical skeletons, they soon lose all mystery. Another way of keeping PCs guessing is making sure some monsters are alien, well-intentioned or simply dumb instead of downright evil. What's worse, some monsters may be guardians against greater evils. 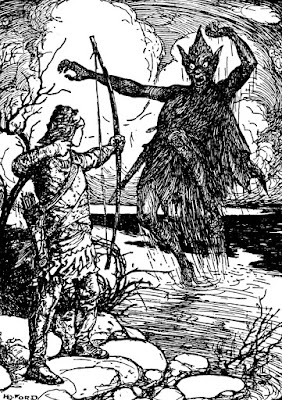 - People are stranger! There is no clear distinction between monster and NPC. NPCs can be, literally or metaphorically, actual monsters, or even something in between - since everybody is prone to corruption of mind, body, and soul, you can never really trust anybody. Maybe not even yourself (see next item).

- Corruption! Madness, corruption, mutation... PCs face threats from within, not onyl from without. As Nietzsche famously said, "Beware that, when fighting monsters, you yourself do not become a monster... for when you gaze long into the abyss. The abyss gazes also into you.".


- The Dark! The Dark is an important element for, well, Dark D&D. In the earlier versions of the game, restricting lighting sources played and important part, and infravision/darkvision was less widespread, as you can see in OD&D (Underworld & Wilderness Adventures, page 9):

In the underworld some light source or an infravision spell must be used. Torches, lanterns and magic swords will illuminate the way, but they also allow monsters to "see" the users so that monsters will never be surprised unless coming through a door. Also, torches can be blown out by a strong gust of wind. Monsters are assumed to have permanent infravision as long as they are not serving some character.

So not only monsters have infravision but also they lose this ability if serving some characters, that are mostly restricted to sources of light that will call their foes attention and can be blown out by wind. 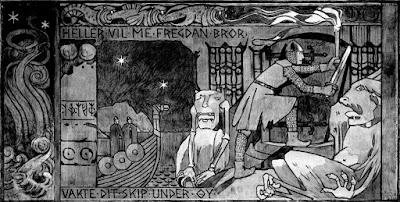 In Dark Fantasy Basic, PCs usually don't have this ability, since they are all human, but I've added it as a feat as an option if you want to play one. I also mention this:

"Carrying a light in the darkness will ruin most PCs’ chances of stealth, but other characters in the party might be able to move around undetected."

So, these are all the "Dark Fantasy" aspects I can think of for now. What about you? How would you describe dark fantasy, or dark fantasy RPGs? How dark are your adventures? Any good games or mechanics to recommend? Let me know in the comments!
Postado por Eric Diaz às 8:26 AM