Here's one aspect of D&D 5e that I find interesting (and somewhat baffling): the obsession with rolling lots of dice. You can find this all over the game.
Sometimes, it works well. For example, I really like how advantage and disadvantage work the game.
Other times, it is a bit wonky - for example, the savage attacker feat that tells you to roll two dice instead of one (and pick the best) for weapon damage.
Sometimes, it becomes absurd - such as the Great Weapon Fighting style that allows you to re-roll 1s and 2s, which would indicate that if you carry a longsword, if would be better to pick the dueling style and fight with one hand (average damage 6.5) than take GWF and use two hands (average damage 6.3). 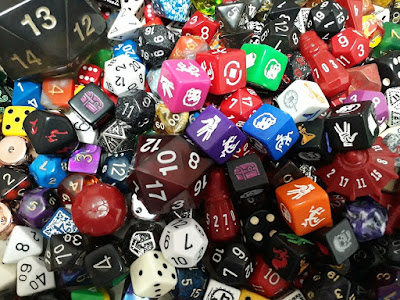 Barbarians get to roll more dice on a crit; half-orcs get an additional die. Halflings re-roll 1s. "Elven Accuracy" let's you re-roll one of two. The lucky feat let's you add an extra d20... which is specially useful if you already have two, add a third and get to choose which one to pick.
Fighters re-roll some missed saving throws. Clerics can "bless" for an extra 1d4 (or give -1d4 to their enemies). Bards can get you "inspiration dice" to roll. Battle-masters get "superiority dice" to spend.
A critical hit does not double or maximize your damage; it allows you to roll more damage dice instead.
You roll damage and HP, as usual, even for monsters. An ogre has 59 (7d10 + 21) HP instead of just 59 HP.
Then, there is the usual, "roll for surprise, then roll initiative, then roll to attack, then roll damage", where one roll would suffice.
Finally, there is an optional rule in the DMG turning your proficiency bonus into proficiency dice... So you'd basically roll 1d20+1dX+Y for almost every roll.
(There are also a few instances of "roll and ignore the dice" which I find irritating, such as the Rogue's "whenever you make an ability check that lets you add your proficiency bonus, you can treat a d20 roll of 9 or lower as a 10".)
I can only assume this is partly just following tradition and partly intentional ("bounded accuracy", something I should discuss some day...). There must be some kind of research somewhere telling WotC that their customers love to roll lots of dice (and hate numeric bonuses). Or maybe this is blowback from all those +1s and +2s you used to have in 3.5e.
In practice, this doesn't bother me much as a player, but as a GM rolling that many dice it is a hassle - especially when the PCs are fighting multiple monsters with multiple attacks... and disadvantage. That's why I always use fixed dice for monsters.
I also have a simple "fix" for monsters with disadvantage: just halve the number of attacks or the damage.
The results will sometimes be nearly identical (if a monster needs 11+ to hit, his accuracy will drop from 50% to 25%; some math here), and sometimes a bit different (if the number need is not between 8 and 12, you might prefer other methods), but combat becomes a lot faster.
Postado por Eric Diaz às 5:11 AM