Glitterdoom* is the first of the "Fifth Edition Fantasy" series from Goodman Games. It was published in 2014 - a period in which 5e were still lacking resources. Small adventures like this one are extremely useful, and even more so at the time. The adventure is made for level 3 characters.
Why did I buy/read this? I like Goodman Games' stuff, I was looking for a short 5e adventure, and ended up buying the whole series on a sale. I ran the adventure for a party of six level two characters. 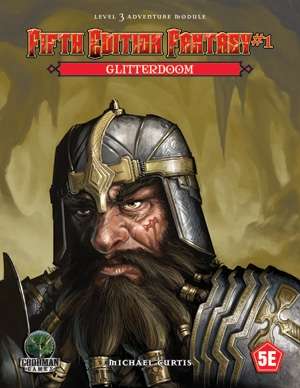 Centuries ago, the glitterdoom came to the dwarves of Steelhand Clan! This divine curse transformed the dwarves into hellish forms with an insatiable greed for gold. Now, a chance encounter breaks open long-sealed gates to unleash the glitterdoom again. Can your adventurers delve into the forgotten halls to confront the subterranean menace?

A Dwarven mine, abandoned due to a goblin invasion, now home of an ancient evil enticed by Dwarven greed... the premise does sounds a bit derivative.  The PCs are also accompanied by an NPC that can show them some hints, there are a few undead and traps... vanilla stuff.
The whole adventure - only 18 pages long -  is very traditional... but it somehow manages to stay interesting for most of it. The monsters are new and creative, and the whole thing is well-written.
The final battle has some awesome moments of horror, as hundreds of "thundering feet" are approaching.
My main source of frustration might be comparing it to my favorite DCC modules. Those are weird, gonzo, funny, creative; this module seems to be "toned down for a 5e audience". It's target audience seems to be 5e players that are not interested in expanding the existing tropes of Forgotten Realms too much (not, say, DCC players trying 5e).
This should be obvious from the covers - just compare  DCC modules and these "fifth edition" ones and you'll see what I mean.
The adventure felt a very "deadly" to me - there are not many ways of parlaying with the monsters or undead, and I didn't see any creative ways of circumventing them, so everything becomes a battle - and some foes are very tough. So it's not exactly "balanced" for 3rd level.
OVERVIEW (explanation here):
Useful? Definitely. If you want to pick a short 5e adventure, this one is simple, well made, well organized. It contains a cool new 5e background ("refugee") too. But even if you're running OSR or other "dungeon" games the module is easy to run.
Inspiring? More or less. It is a bit more interesting than the premise. The (B&W) art is good, the monsters are cool, but it is very "default D&D dungeon" for the most part.
Bloated? Not really, it is mostly well written and to the point. It contains some tired rolls (make a perception check to find a ruby, without describing where and why it is hidden, etc.).
Tiresome? Nope. A bit "traditional", but nothing made me roll my eyes.
Clear? Yes, it is well written, well organized, the map is simple. The only thing I am missing is a description of the "greed grubs". It is hard to say if they are worms or humanoids. The text mentions feet and crawling; the picture of a "giant greedy grub" with "smaller versions" show both (the giant version is humanoid, the smaller versions are worms - which I think is the right answer despite the mention of feet in the final room).
In short: If you're looking for a short 5e dungeon that relies heavily on D&D tropes, without subverting them, but does so in a creative manner, I'd recommend this one.
* By purchasing stuff through affiliate links you're helping to support this blog.
Postado por Eric Diaz às 7:38 PM