Wrath of the Immortals is FREE!

I don't know how this one slipped under my radar, but as I write this, you can get Wrath of the Immortals* for free on DTRPG!
This is the "Immortal" part of BECMI; the piece missing from the D&D Rules Cyclopedia, one of my favorite D&D books ever. From Wikipedia:
The Dungeons & Dragons Rules Cyclopedia was first published in 1991, compiling and revising the major rules from the Dungeons & Dragons Basic Rules, Expert Rules, Companion Rules, and Master Rules boxed sets.[1] Instead of also adding the major rules from the Immortals Rules box set to the Rules Cyclopedia, TSR published a separate product in 1992: Wrath of the Immortals.[2] 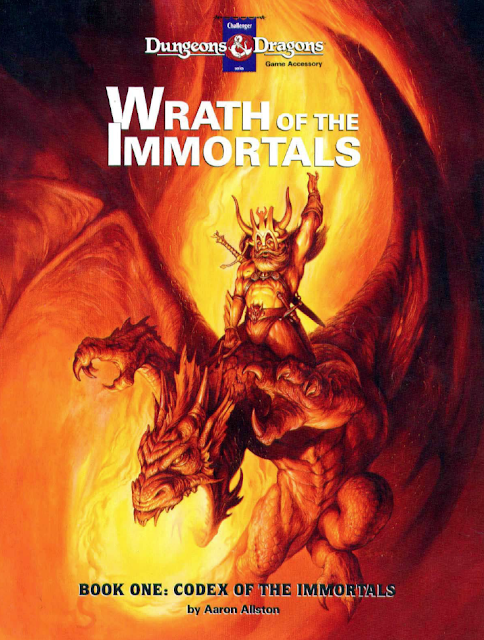 Immortals. Warriors of the outer planes…

Wrath of the Immortals unveils untold secrets of how to create and role-play Immortals in the World of Mystara and other dimensions. The frightening power of the Immortals, their strange worlds, and their secret alliances are revealed at last, but is it in time?

And then, the final confrontation! In the name of the Immortals, the two greatest empires of the Known World clash in a brutal war. The world has gone mad… will both disappear from the face of the earth? Wrath of the Immortals' amazing saga takes heroes on a six-year quest, with adventures from the apprentice to the highest level of the game.

The supra-natural beings march, and the world trembles before their colossal power. The world will never be the same!

*By purchasing stuff through affiliate links you're helping to support this blog.