Let's talk about the thief a bit more (continued from here).
So, most skills can easily be reduced to a d20 roll. Rolling 1d20+level works well but a small bonus to the starting thief would be even better. Starting with 30% + 5% per level would allow you 99% at level 14.
[Notice: rolling 1d20+4+level gives the thief a exactly 30% chance at level 1. Also notice that I use these numbers just because I want competent thieves on level 1, but you might as well just use 1d20+level]
Now, in the last post, we skipped through a couple of things: read languages and scroll use. And there is also back-stab. And we will finish be consolidating ALL the thief abilities with the same roll. 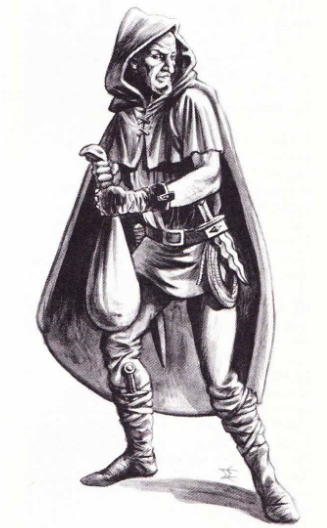 Read Languages
A thief of 4th level or higher can read non-magical text in any language (including dead languages and basic codes) with 80% probability. If the roll does not succeed, the thief may not try to read that particular text again until they reach a higher level of experience.
Scroll Use
A thief of 10th level or higher can cast arcane spells from scrolls. There is a 10% chance of error: the spell does not function as expected and creates an unusual or deleterious effect.

These are very similar: the thief can read stuff he was not supposed to, even magic scrolls. And they happen too suddenly: by level 3 the thief knows maybe two or three languages, by level 4 he can read 80% of everything.
What if we use the same system here too? Let's try:
- At level 1 thief has 35% chance of reading languages.
- By level 4,  50% chance.
- By level 10, the chance is 80%.
- By level 14, 99%.
Now, apply the same exact numbers to scroll use. The thief can use scrolls from level 1, but the chance of error is significant.
Now let's look at back-stab, the hardest one.

Back-stab
When attacking an unaware opponent from behind, a thief receives a +4 bonus to hit and doubles any damage dealt.

Now, what if back-stab is a skill? Attack using d20+thief level+4. If functions exactly like other skills. You could even use percentages, but that would require subtracting 5% per point of AC the target has - if you're using descending AC, this is a bit of a hassle.
A level 14 thief has +18 bonus to back-stab, but only a fraction of level is usual combat (in Dark Fantasy Basic, I use 2/3, which means the thief would attack with 10, a significant difference).
Anyway, now let's divide the thief's abilities in categories:
- Read languages, including scrolls.
- Perception/detection (find trap, hear noises, and so on).
- Stealth (move silently and hide in shadows).
- Delicate tasks (pick locks, pick pockets, disable small traps).
- Back-stab.
Every one of these skills can use the exact same system. You have to adjust picking pockets and back-stab to the victim, but other than that it works perfectly.
Notice that separating traps in two different skills is neat because:
- Finding and disabling are separate rolls.
- The thief can only disable small, delicate traps.
And then there is climbing, which breaks all rules and we will leave aside for now (although, again, it is easy to turn it into a 85%+level skill).
In short... as you can see, the thief can easily become one kind of specialist or expert. He has half a dozen skills - swap delicate tasks for tracking and read languages for herbalism (or some other form of understanding nature) and you got yourself a ranger - who can climb, hide, etc.. Swap climbing for lore, change other skills and you have a smart scholar who is competent even at level 1 - and can read unknown languages, do delicate tasks and perceive hidden things. Maybe swap climbing for poisoning and you've got yourself an assassin. Maybe you can trade delicate tasks for 1d6 HD and get yourself a thug.
I think I found my favorite thief so far.
Postado por Eric Diaz às 8:00 AM