Here is an optional rule from the Rules Cyclopedia: 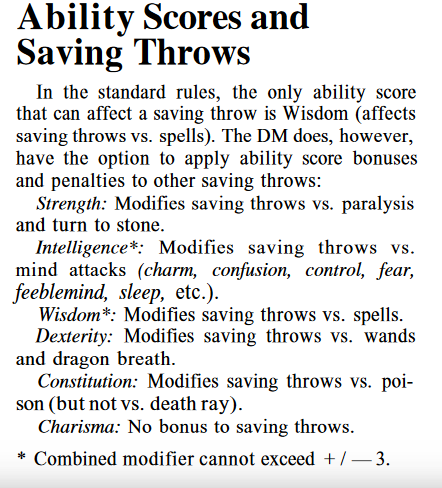 These are pretty clear and straightforward.
But existing saving throws are unnecessarily fiddly.
Wands, for example, are simply not common enough to get a separate category, but even if they were, the save is usually very close to a +2 bonus when compared to spells. They could just say that in the magic item section. It would be more than enough, maybe even superfluous.
And there seems to be no underlying logic behind numbers. I thought that dwarves were comparatively bad at breath weapons because of their short legs... but by level 14 (in B/X), they are better against breath than spells!
Similarly, thieves (who supposedly would have good Dex), do not have particularly good saves against breath weapons, being better against spells, for example.
Anyway, it is not hard to replace old school saving throws for a single saving throw (see Swords and Wizardry) with various ability bonuses. Assuming slightly positive ability scores bonuses*, you might as well use Target 20 and the numbers wouldn't be that far off.
[* Far from certain in B/X or the RC, but expected in AD&D and all modern games]
Anyway, we could use:
Strength: paralysis, petrification, things stopping you from moving.
Intelligence: spells that affect your mind.
Wisdom*: all spells.
Dexterity: dragon breath and anything that allows you to get out of the way.
Constitution: poison (including cloudkill) and things that affect your body without causing HP damage (including polymorph,).
Charisma*: nothing.
There are some problems here.
Charisma is the least of them - it affects reaction rolls and hirelings, so it is okay if it doesn't affect saves.
Wisdom, on the other hand, does nothing but give a a bonus to save against spells. Notice that saves against spells are usually a bit harder then most saves, and this rule puts them closer to existing saves... thus negating, once again, the need for separate saves.
Conversely, the death save is usually easier than most... but the lack of an ability bonus makes it closer to other saves.
Let's consider another option: a single mental defense. Strength and Constitution apply as written. Dexterity also applies against spells that can be dodged. But you have a single bonus against spells that cannot be dodged, which is Wisdom. Intelligence is still useful for languages, Charisma for reactions, etc.
Of course, with ability checks, all abilities have purpose regardless of saves. Ability checks work very well, with one caveat - not everybody likes a "roll under" mechanic in a "roll over" game. But that is the subject for another post.
I don't know. I'm think Fort/Reflex/Will makes sense after all. But a single saving throw might be even better.
(BTW, I might actually write a "minimalist B/X" one day. There is a draft in my public folder. I still love Dark Fantasy Basic but I want to have a single volume that contains everything you need to play the game AND is even more compatible with existing OSR material. Let's see.).
Contains affiliate links - by using them, you're helping to support this blog!
Postado por Eric Diaz às 8:24 AM