After a quick d6 detour, let's go back to 1d20 skills.
As we've seem, climbing is a bit odd, because of the big chances of success from level 1. The motive is probably a practical one: the consequences of failure are dire. From the OSE SRD:

A roll is required for each 100’ to be climbed. If the roll fails, the thief falls at the halfway point, suffering falling damage.

So, to climb one kilometer, you have ten attempts, and you'll probably die. Those "good" probabilities are not looking so good right now.
And if you make it 1d20+level... things get even worse.
HOWEVER...
Consider one alternative. Say, 1d20+level, try to get 20. This means 10% chance of success on level 1. BUT. Failure means you're STUCK. A natural 1 means you fall.
And you can try again. Multiple times. But if you roll a 1...
(This works well for dangerous skills, but I usually DO NOT like critical failures when fighting. Except, maybe, for a particularly dangerous maneuver).
Have you ever tried rock climbing? If there is no way to continue, you can usually just climb back. Falling doesn't happen so often (but, when it does, it can be deadly).
Another thing to consider: if you're climbing a mountain, you're not looking for the most vertical wall to climb (unless you're doing it for sport)... probably the opposite. If you fall, you are unlikely to fall ALL THE WAY down. Maybe there is some chance you'll fall to a lower point. Say, a 100' fall (or, even better, 1d20x10'). Which will kill most characters, but not all. 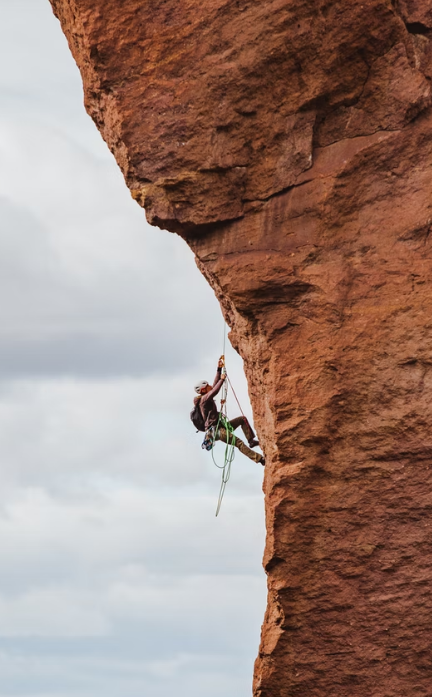 This works well for climbing. But is also a great system for thief skills in general: try multiple times, but a natural 1 means disaster. Looking or disarming traps? Guess what, the trap got to you first. Lockpicking? You broke your set of picks. Hearing noise? You're pretty sure you didn't hear anything, and if there IS someone there, he heard you instead! Reading magic scrolls? The system works perfectly!
This "solves" thieves' skills in two ways: it makes them more effective (multiple attempts) while making disastrous failure less likely (only 5%... at first).
If you want to add tension (and agency), you can always offer your players a hard choice after they fail two or three times. It works with climbing, but also traps, lockpicking, and so on.
"Okay, there is nowhere to hold your hands... except if you jump a few feet to the die. You need 10 or more to succeed, but if you fail, you fall... What do you do?"
Postado por Eric Diaz às 11:22 AM