The original order of abilities in old school D&D is Strength, Intelligence, Wisdom, Dexterity, Constitution, and Charisma (SIWDCC). The idea is that you had "prime" abilities first (Strength for Fighters, Intelligence for Magic Users, Wisdom for Clerics) and then three abilities that were useful for everyone (Dexterity for speed, Constitution for HP, Charisma for morale).

With the introduction of many different classes, the original meaning of the SIWDCC order was lost, which is why WotC have adopted a Physical/Mental divide, listing abilities as: Strength, Constitution, Dexterity, Intelligence, Wisdom and Charisma.

The modern order doesn't bother me; it seems to make sense, and I like the Physical/Mental division. Here is a great post about the subject, by the way.

There is at least one interesting (and probably accidental) feature of SIWDCC: when you think of most common archetypes, each pair of abilities can be viewed as "opposites" in a way.

Here is what I mean:

Strength x Intelligence: the dumb brute versus the weak wizard or scholar; Fighter versus Magic-user.

Constitution x Charisma: the rugged, stoic type versus the sweet-talking singer or swindler. Dwarf versus Elf, or Ranger versus Bard. 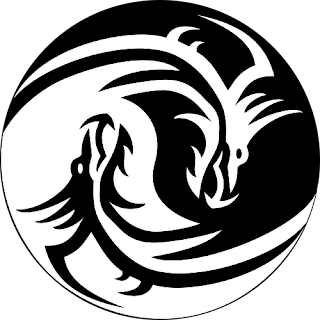 This is mainly a curiosity; some D&D archetypes and classes will need "opposite" attributes (monks, assassins, etc), but it can become useful when generating NPCs or even PCs if you want results that might a little more sense than 3d6 in order (and yes, I get it, it might be cool to think of a justification for seemingly disparate abilities),

For example, let us assume you're using 3d6 in order and want "balanced" characters (i.e, not straight 18s or "hopeless" characters).

If you already know the type of character you want, distribute the results accordingly - the original pairs should be kept.

For example, if we are creating a Wizard, we can use: Strength 3, Intelligence 18, Wisdom 15, Dexterity 6, Constitution 7, and Charisma 14. This is an old, wise wizard; a quick-thinking, smart but inattentive wizard (another common archetype) with the same numbers could have Dexterity 15 and Wisdom 6 instead.

A big, dumb Fighter, like Gregor Clegane from A Game of Thrones, would have Strength 18, Intelligence 3, Wisdom 7, Dexterity 14, Constitution 15, and Charisma 6.

If you don't know the type of character you want, use the original order (i.e., just fill the character sheet in order): Strength 15, Intelligence 6, Wisdom 18 , Dexterity 3, Constitution 7, and Charisma 14. This looks like some kind of stoic cleric (or paladin) to me; maybe an old veteran, a natural leader, still a good fighter although somewhat fragile and slowed down by age.

Let us try some other examples? I rolled these as I was writing, with no re-rolls, I promise:

Most iconic classes AND races in D&D I can think off would fit in this Yin-Yang pattern, but a few exceptions can be made. The Monk (or Mystic), which requires Wisdom and Dexterity, seems to be the main problem (the Ranger in 5e is similar - although I would argue the archetypal Ranger would need Constitution or even Strength before Dexterity, if you think of Aragorn). There are also, of course, plenty of classes that rely on multiple abilities; a Paladin or Warlord might need both Charisma and Constitution, but also Strength, and probably some Wisdom or Intelligence (come to think of it, the Ranger and Monk could use some Strength and Constitution too...).

There are also some non-iconic "special classes" that would break the mold. The Muscle Wizard comes to mind. Some kind of super-model/celebrity class could be built around Constitution and Charisma.

For all those classes, some special exceptions would have to be made to make them "optimal" or even viable; one option is on the second table, below.

In short: get an old school character sheet, roll 3d6 for Intelligence, calculate Strength, roll 3d6 for Dexterity, and so on, and you get a viable, balanced character very fast.

If you don't like subtracting, use this to find the value of the second ability in each pair:
Or this one, if you prefer something closer to 4d6 drop lowest (the sum is 24, and the lowest ability is 6; if you roll 5 or lower, roll again):
* Alternatively, results from 3 to 5 in the first roll would break the mold to create a Monk, Dexterity Ranger, or some other special class.

This method is good for creating fast, random, balanced, archetypal characters. If you want more creative results, less randomness, more customization, and so on, many traditional methods will do just fine.

UPDATE: reading the AD&D PHB again, there are some additional reasons to believe this is a deliberate pattern: a low Strength character can only be a Magic-User, while a low Intelligence character can only be a Fighter; a low Dexterity character can only be a Cleric, and for low Wisdom, a thief. On the other hand, special classes such as the Assassin, Illusionist and Monk break the mold.
UPDATE 2: I should mention that this is the system I ended up using in Dark Fantasy Basic. Dark Fantasy Characters simplifies this further; take a look at the previews (page 5-6).
Postado por Eric Diaz às 7:52 AM