WotC has release the second iteration of the "Plane Shift" series this week. You can get it here. Their first effort was Zendikar - you can see my review here.

I found Plane Shift: Innistrad to be way more interesting than Zendikar. Zendikar, as I wrote earlier, had a very lackluster presentation of a potentially awesome setting. Innistrad, in many ways, is the opposite: it looks like a very traditional gothic setting in the outside, but the PDF does a great job of highlighting what is special about it, and giving you things you can use in your game.

Most of all, it is a lesson in the noble art of re-skinning, which is probably my favorite aspect of it. From cover to cover, the PDF gives you tips and hints on converting classes, races, settings and adventures ("Curse of Strahd") from your classic D&D to Innistrad. 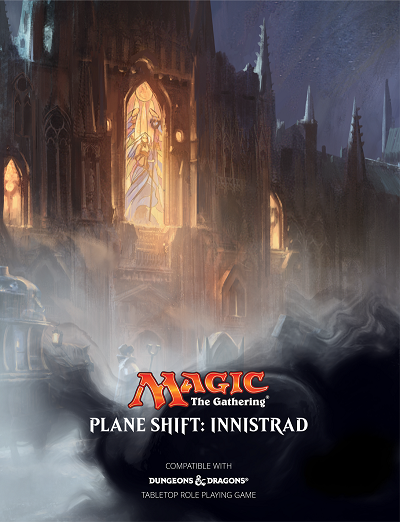 This is a great way of showing people that you can basically get any adventure or campaign and insert it into the type of setting that you prefer, avoiding "vanilla" fantasy if you want it, or even dialing things back from the weirder aspects of fantasy if that is not your thing. Take a look of my re-skinning of Lost Mines of Phandelver to the MtG world of Ravnica and you'll see what I'm talking about.

Another awesome aspect of Innsitrad is the monster variations. This is an underused idea in D&D that make monsters infinitely more interesting. 5e's Monster Manual has a few interesting ideas, and even LMoP does this to some extent. My own bestiary (if I ever write it) is created around this idea. The gist of it is that you get a familiar creature and add a twist to it, completely changing the encounters. For example, werewolves are all the same in the MM, but if you add one of Innistrad's traits to it, the fight will look completely different: 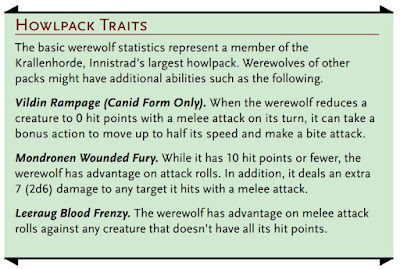 The fact that you can use traits such as this to reflect some aspect of the setting ("Vildin werewolves are particularly bloodthirsty", etc) or to investigate aspects of the setting to plan for combat makes things even better.

There is lots of useful "game" stuff in this PDF. A few new creatures and creatures traits, a flavorful new background (inquisitor), some flavorless human variants (oh, well...), new rules for madness and corruption, etc.

The art is great as always. 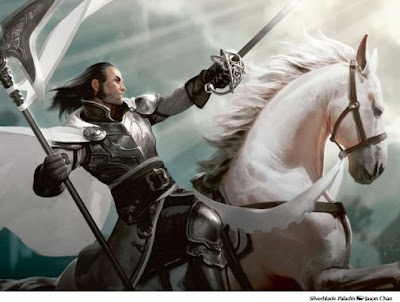 Since most of the setting details can be found online, as the PDF itself points out, all this re-skinning seems to be a good use for Plane Shift books. The alternative - using this short PDFs as summaries of the MtG settings - seems to be a bad idea, specially for Innistrad, since most of it is homage to classic horror, with some cool variations but little that is really unique.

There is little to be said about the setting; basically, it has werewolves, vampires, angels, demons, etc. Mostly Ravenloft, some MtG lore, some Diablo, some Lovecraft, all Gothic fantasy. It doesn't describe many interesting factions or NPCs, Good and Evil are clearly present but the shades of gray come from the fact Evil has affect pretty much everyone.

Innistrad has at least one interesting twist on Gothic horror, and although it might sound that adding Lovecraft to Ravenloft (or to anything, these days) is not the most innovative thing in the world, I really like how Innistrad implements it; basically, you got your Ravenloft / Hammer horror world with vampires, werewolves and all, where the church and peasants with pitchforks fight the evil powers... until Emrakul (basically Cthulhu and the like) invades the world and starts driving everyone, including the angels, crazy.

This seems like a perfect fit for Curse of Strahd, which takes characters to level 10 - after they are finished with the campaign, add Emrakul to the mix for some high-level threat to Ravenloft's very existence.


In short, Plane Shift: Innistrad is a great resource for D&D horror. It is not my favorite MtG setting, nor is it "weird" enough for some peoples' tastes, but is is a great improvement over the Zendikar PDF and, basically, almost the best I would expect from a 40-page conversion of a MtG setting to D&D.

WotC seems to have found its way with Plane Shift, and I'm looking forward for the next ones.

All art and text copyright by Wizards of the Coast LLC, used under fair use doctrine, for purposes of criticism only.
Postado por Eric Diaz às 10:38 AM