How complicated is 5e?

As I finished writing this I realized it came out a bit more negative than I expected. I am quite the 5e fan and I only spend so much time thinking and writing about it because it is my current game of choice. I am going to publish anyway, because you can always choose to skip this post or, even better, disagree in the comments, and I would like to hear different opinions.

As much as I long for a simpler version of D&D, I guess that from now on 5e is as simple as it gets. The reason for that, I think, isn't because people like complexity (almost nobody likes that) or options (almost everybody likes that), bit because there is a significant chunk of D&D fans (probably a majority by now) that think gaining a level means they necessarily get new gifts for their characters - and not only some HD, spells and better saves, because this isn't shiny enough. 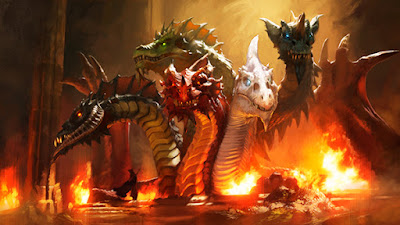 To each their own, of course. D&D 5e has lots of awesome class features that I love, and if that is what is important to you, great! As long as you don't take it to the extreme of rejecting other people's preferences and trying to make different play-styles not viable in D&D.

Take feats, for example. Some people like them, some don't. I love feats as a concept, but I favor the idea of making them an optional part of the game, so that people can choose the level of complexity they want to add to their characters.

Unfortunately, this doesn't quite work as intended. Since most classes rely on one ability or a couple of them (for example, optimal fighters are often weak OR slow), ability points become weaker after a while. Worse, I saw quite a few people saying that it is unfair that you should forego your ability score increase to get you cool new feat - never mind some feats are often way better than that! How on earth could you even try to make a balanced games if feats are optional but you give nothing in return for them? It seems obvious that there would be no comparison between characters with feats and those without them (unless you're using very weak or useless feats), and now all monsters, modules and adventures would have to be balanced towards one or the other, but not both.

(Not that I'm saying 5e is perfectly balanced - but it is mostly balanced enough for me, and in any case at least they tried!)

Still, those people seem to be a minority, and some of them just don't like 5e at all. What is more common is that people take ignore that feats are optional; now , they are pretty much an expected part of the game. Unless you're playing Basic, I guess.

Now, even the champion fighter, that is (apparently) supposed to be a simple class, has access to seven feats in addition to their class features (that are quite simple, I must admit).

But feats are far from the most complex part of 5e; most classes get about five of them, which is manageable.

Class (and race, and background) features are a different story. Depending on the class, you might get almost a new feature per level, on average. Worse, most of this features are concentrated in the first few levels, This means that, by level 3, a character has about half a dozen features or more, with each of them being exceptions to the general rules one way or another - not to mention spells, which most classes now have. 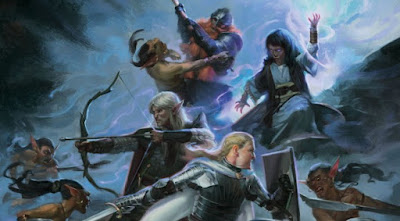 This has multiple negative effects. Low-level play is too complicated, leaving no room for new players to learn the rules before learning the exceptions. No moment where the Wizard has a single spell to grok, or the Cleric has no special power other than turn undead, before you have to face lists of different spells and subclasses to choose from (at least those are mostly concentrated on 3rd level for many classes).

If the game was simpler at lower levels, you could just choose to set your campaign there. There would be a conceptual simple space to test the system, try out some classes, get accustomed to character death, etc., while  still leaving room for more complex play-stiles at higher levels. Alas, it is not the case. Things are complicated from the beginning.

Lots of features at first level also encourages multiclassing, up to a point, which I really dislike. The advantage of having strong, archetypal classes is exactly playing into those archetypes; by muddling things around, you make the concept a bit weaker, make character optimization more important and powerful, generate doubt about how features from different classes interact, and make me wish I was playing some game where you can just choose your features at will instead, since choosing background, class, race, subclass, and features within the subclass seems like enough choice for me without adding multiclassing.

Now, the limit of exceptional features a character should have, in my own opinion, is about seven. And I also happen to think the game "really starts" at level 3. Your mileage may vary. But you can see why 5e looks too complex for my taste.

I really don't mind that as I player - managing multiple character features is feasible when you have a single character to deal with - but it can be overwhelming as a GM, specially if you want to help new players out.

Consider this: I often run games with a "realistic" bent (things like A Game of Thrones), where enemies are not unlike the PCs. Maybe a rival knight or an evil scholar, instead of a dragon or vampire. Now, in 5e, I can no longer say that the bandit leader is a "Fighter 10", but I must choose his archetype, fighting style, and possibly feats. Also, he can be a Strength Fighter or Dexterity Fighter. Also, should he be a fighter at all? Why not a ranger or barbarian - since they are not types of fighters anymore?

The solution is... Basic D&D, I guess? The "Basic PHB" has more than one hundred pages, with almost no illustrations. Compare this to Moldvay's Basic D&D, with 64 for both the players AND the GM!

Credit where credit is due, though: the fact that we have a free Basic PDF and a good enough SRD is an amazing thing. Playing Basic is, indeed, a good compromise. I really appreciate the fact that feats and multiclassing are clearly optional, and I learned to love the proficiency rules. But I like the extra options, specially classes and archetypes, so Basic has to little options with little gain in simplicity for me.

What bothers me is that the book could have half the page count, with 80-90% as many options and feats, if some things were simplified (and better written - really, do we need to say "short rest or long rest" every time?"). A single "proficiency dice" bonus could be used instead of separate concepts like number of rages per day, superiority dice, bardic inspiration, song of rest, martial arts bonus, etc, with little adjustments (but this would ruin the "new feature every level" thing). Also, do we really need Wizard, Warlock and Sorcerer with separate subclasses for each? An so on.

In fact, let us go back a little - why aren't fighters, paladins, barbarians, monks and rangers a single class (with an optional feature or two) until, say, level 5? Everybody gets a second attack, three of them choose a fighting style, but they need to repeat the whole text for each different class. Did they give up on creating a single Warrior class in the middle of the process? Or do they hate trees for some reason?

This is not to say 5e isn't a great game. It is. It is probably my favorite version of D&D to play RAW, exactly because it has so many options and, okay, it's way easier than 3.5 or 4e (or even RC and AD&D in many aspects) for me. I probably would not even bother fixing it, because it would be more work than just saying "no multiclassing allowed in my games unless it happens in-charachter and not to get bigger bonuses". Or something.

Still, I think we could do better. Not only for those people that like simpler games, like me, but for people trying to learn the game - which might benefit all of us D&D fans.

Rant over. Expect something more positive next time.

All images copyright of Wizards of the Coast.
Postado por Eric Diaz às 7:06 AM