Low Fantasy Gaming ("LFG") is a d20/D&Dish RPG written by Stephen J Grodzicki, aimed at Sword & Sorcery games. It is quite old school, with some modern stuff; it calls itself an "hybrid", but I think the OSR crowd will appreciate it more. It is very compatible with old school modules and OSR adventures, which I appreciate.

Like the name says, the game is focused on Low Fantasy. Characters advance only to level 12, and spells don't go beyond level 6. What is more relevant, all magic is "dark and dangerous", and each spell involves a risk - fortunately, even MUs become decent combatants as they level up. There are elves and dwarves, but they are optional and only take a single page (for both). Magic itens are rare and flavorful. 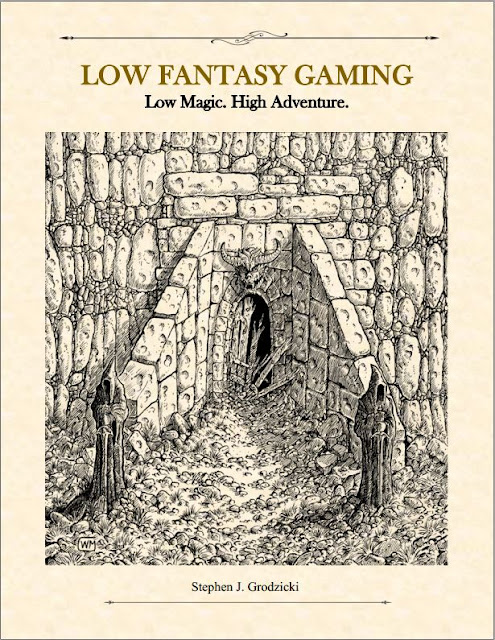 Although the mechanics are somewhat similar to old-school D&D (with a few modifications, such as replacing Wisdom with Perception and Willpower and creating a Fighting Fantasy-style Luck ability in lieu of Saving Throws), it has plenty of interesting ideas one can use in any RPG.

The basic resolution method is roll-under ability, with roll-over AC for combat. If a character has a certain skill (such as Acrobatics, Arcane Lore, etc), he can access an expendable "Reroll poll" once per action to try again after a failure. This "roll under, roll over, reroll" stuff may bother some people, but it works and its really not that complicated. I would prefer 3d6 for skills but, hey, easy to fix, right?

There are only 5 classes, Barbarian, Bard, Fighter, Rogue and Magic User, which seems adequate for the genre. Each class takes two to three pages; they are somewhere between B/X and 5e in terms of complexity, which is good enough for me, even though I would prefer them to be even simpler. All classes get feats, but you must come up with your own - the game gives no examples, apparently to avoid constraining your creativity. Alternatively, you can trade a feat for an ability increase. I wouldn't mind a few examples, to be honest, specially to help inexperienced players out.

Combat is straightforward, with some free-form "martial exploits" (stunts) that allow for more creative combat. There are plenty of rules for permanent injuries and some clever tricks for making combat deadlier (such as characters with 0 HP being harder to heal, which avoids one of 5e's problems).

LFG has a comprehensive catalogue of monsters that also fits the genre: there are half a dozen human foes, but only one type of dragon, for example. Monster stats are lean and objective, the way I like them; most monsters  have a special attack on a natural 19, a nifty idea to make them more varied without adding much complexity. The fact that monsters have their own Luck to spend makes me think of several exploits to use against the PCs... Even though only PCs get major exploits if you play RAW. 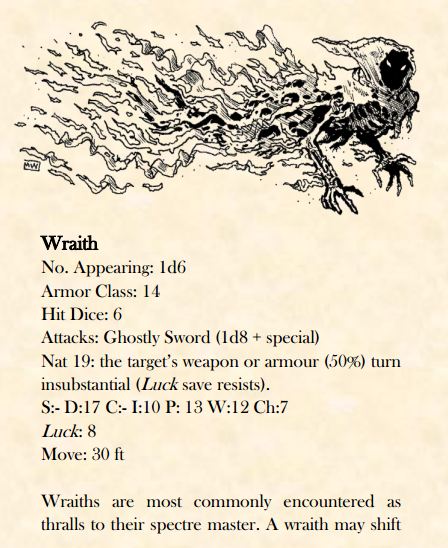 The book looks good. The art is B&W over light "parchment" background, very clean and easy to read. Some of the artwork seems to be stock art and nothing looks particularly stunning, but very good overall, with an average of more than a picture per page.

The book is also well organized, with a decent table of contents and a good index at the end. The two-column layout is pretty basic but, again, easy to use.

The most impressive feature of this game is how complete it feels in its 184 pages. It has extensive tables for encounters, itens, spell failures, injuries, and so on. 120 spells are included, and about 100 monsters. Most situations you can think of are included (dungeons, chases, falling, madness, etc). I haven't found general rules for hazards, which would be fitting, in my opinion; maybe this is an oversight, or maybe the author felt starving to death isn't heroic enough - in any case, I got you covered (PDF version here)

I honestly tried coming up with some criticism to make the review more "balanced" but even though I can find a number of things I would do differently (for example, I dislike -1 and +1 circumstantial bonuses in combat), I cannot really say they are "downsides" or that they get in the way of the game. If you're looking for new, groundbreaking, experimental RPG concepts you might be disappointed, but that is not the point of LFG.

Overall, I'm very impressed by the game (you might have guessed it, since it's been a while since my last review). Not only the game is complete, but it manages to keep the focus throughout each sections: magic, combat, monsters and miscellaneous rules all fit the Sword & Sorcery theme very well.

LFG is not only amazing for a free game, it is an amazing game overall. Oh yeah - did I mention that the PDF is free? Get it here and see for yourself - I think you'll enjoy. There are also print versions in Lulu - one for less than US$5 as I write this.

UPDATE: There is a deluxe version of Low Fantasy Gaming* now! Check it out.

*By purchasing stuff through affiliate links you're helping to support this blog.
Postado por Eric Diaz às 6:11 AM