Fifth Edition D&D versus 13th Age (the good, the bad and the damned)

Let me start by saying that I'm not really into edition wars and I think both games are awesome. 5e is currently my favorite RPG, and 13A has awesome ideas that I would use in ANY version of D&D, and some I have adapted to my own RPG.

But then again, I (very) often read affirmations such as this in many different forums (specially in some forums that frequently seem to have an anti-5e bias):

Well, I must disagree. "D&D but better" is a true mark of the so-called Fantasy Heartbreakers, and it is not what 13A is about. The games are very different from one another, despite being inspired by previous versions of D&D (specially 3e and 4e), and they scratch different itches.

I assume most of you are more familiar with 5e D&D than 13A, because I am, so I'll compare 13A's ideas as alternatives to 5e, even though 13A came first. You'll see that I find that most alternatives in 13A have some good and some bad aspects (therefore, the good and the bad), and, in a few cases, I prefer using a combination or another alternative in my games (my RPG is called Days of the Damned... therefore "The damned"). 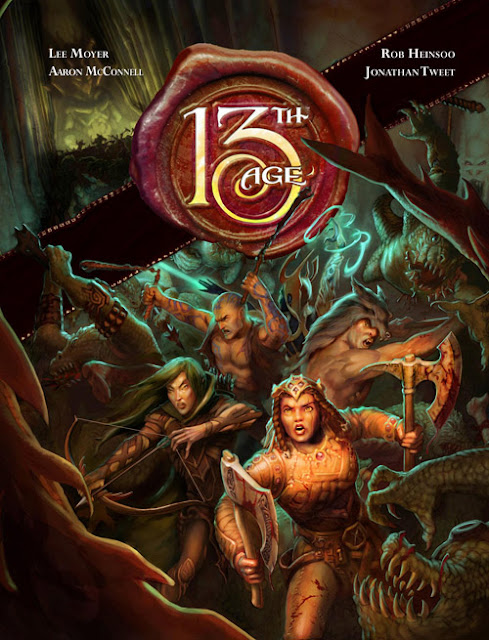 5e skills aren't perfect - but they are few and straightforward. Backgrounds, in 5e, give you a few features and a couple of skills. Say, if you pick the City Watch background, you may get the Athletics skill. In 13A, you create your own background (of course, you can do that in 5e too), and it functions as a skill. So you may have "I was on the city watch +3" instead of "Athletics".

Interestingly enough, in 5e each background has an unique feature, but in 13A, where backgrounds are more unique, mechanically they all work exactly the same.

The good: you come up with your own skills! Every character - and every background - is unique! You don't even need a list.

The bad: when playing 5e, I'll often say something like "everybody roll Athletics to climb the wall, DC 15". In 13A, it would be something like "everybody roll Strength plus any relevant background... city watch? How come you can climb? Oh, you worked in the watchtower, okay. And you? Purple wizard? Ah, you also studied in a tower. Halfling from the shire? Well... you can say you climbed in and out of holes, but maybe add half of your background* instead of it all. Yeah, round down. +2 instead of +5. Probably. You have Sheriff +3 too? How does that apply? You had a watchtower in the shire? Okay, you can use that instead..."

(*not actually in the rules AFAIK, but I have seem one of 13A's designers suggest that in an interview.)

The damned: I use eight skills, and that is it (although you can have specialties). Backgrounds are very specific and give you advantage in very specific circumstances: if you are a Barbarian of the Icy Mountains, you certainly get advantage when climbing mountains, but if you want to jump or ride a horse you better have the Athlete skill.

I think this rule is very useful for 5e: this barbarian would get advantage when rolling Nature and Survival in the Icy Mountains (because barbarians are often so bad at this stuff in 5e), but no advantage for surviving in the hot desert.

13A has a very interesting feature called One Unique Thing: "Your character’s One Unique Thing (their unique) is a special feature invented by you, the player, which sets your character apart from every other hero. It is a unique and special trait to your player, and markedly unusual. The intent is that it provides a special flavor to the campaign and can assist the GM in determining how your character can interact with characters and story in the campaign". (source)

The good: every character is special and awesome in some unique way.

The bad: character funnels and disposable characters are no longer a possibility, if you like those. Also, some people seem to think it is an awesome idea to use this feature to change the whole campaign setting. You're not doing "I was the last person to ever see the sun" in my Ravnica campaign, sorry.

The damned: in fact, I think OUT is a great idea that I use for many games, with the caveats above.

Theater of the mind

D&D 5e has ranges in feet; you can walk 30 feet in a round, hit someone 100 feet away with a bow, etc. Remember, in 4e you moved "X squares" per round and miniatures where mandatory, RAW. In 13A, you have "positions" instead: Nearby, Far Away, Engaged, etc. As it says on the SRD, "Combat is dynamic and fluid, so miniatures can’t really represent where a character ‘really is.’".

Plenty of people seem to think 13A is perfect for "theater of the mind" battles, where no miniatures are used. It probably is, for them. But I don't use miniatures in my D&D games at all, and I have an incredibly easier time dealing with concrete measurements (even if I don't worry about EXACT distances, the distinction between 20, 100 and 300 feet is important to me) than abstract "positions". So 5e is perfect for me in this regard too.

Overall, "abstract" mechanics where concrete measurements could be used are harder for me and my friends to deal with. For example, I think saying "I have 97 gold coins, I spend 13, now I have 84" is easier, faster and simpler than saying "roll you wealth with a -1 penalty to see if you can buy other stuff this week" like you do in some versions of Fate RPG.

The good: if you dislike dealing with numbers or grids, 13A seems to be a good fit.

The bad: if you prefer concrete numbers or good guidelines about using grids and miniatures, 13A is not a good fit.

5e D&D explicitly mentions its adventures are based around three pillars: Interaction, Combat, and Exploration. Characters are notably absent from this list (although this is a whole different discussion, I think it illustrates my point). 13A has a strong focus on characters: OUT, lots of feats and powers, loads of HP, etc. The way Icons work also indicate that the world turns around the cahrachters, in a way (or that they are the focus of all adventures).

The good: 13A has lots of possibilites of customization, a great number of feats (too many for my tastes, but hey, you don't need to sue them all), and characters can become demi-gods.

The bad: see "backgrounds" and "unique characters" above for some examples on how infinite character possibilites can bring some problems.

The damned: my games can go either way, depending on the campaign. In Days of the Damned  I list "Interaction, Combat, Exploration, and Character Development" as main foundations, with Character Development being the most important one, so in this regard it is closer to 13A.

Roll to see how you attack

13A has this interesting feature where some attacks are only activated if you roll a certain number (a "natural 17", for example), or at specific rounds in the battle (every other round, after three rounds of combat, etc, depending on the escalation die). For example:

Some features have both limitations: "Triggering Roll: Any natural even roll, when the escalation die is 2+", which can be a bit confusing IMO. By comparison, the 5e action / bonus action / reaction economy is a lot simpler.

Monsters have similar features, that trigger on a "Natural 16+" or "Natural even hit".

The good: you have interesting attacks that you don't have too think too much about; just roll and see what you get. Some compare it to "artificial intelligence" for monsters.

The bad: this rubs some people the wrong way - myself and some 13A fans included. I like declaring my intentions before rolling the dice. If I want to bash with my shield, I would prefer "hit or miss" instead of "hit with shield or hit with your sword". I can see it is a good idea to have "artificial intelligence" for monsters, and even special attacks that trigger in some rolls, but overall I prefer to play my NPCs instead of letting the dice make this choice. I also believe there is a  reason most videogames don't let chance tell your character if he hits with sword or shield.

The damned: I included some rules on how to plays NPCs in combat. I use special attacks as default tactics, with some built-in limitations.

No good or bad here, these things are mostly a matter of taste.

Zero-to-hero: In 5e, you start as a somewhat limited character, with a significant chance of dying in a few rounds, and eventually can turn into a mighty hero - but with plenty of weaknesses (in you saving throws, for example) - maybe somebody like Conan or Elric. In 13A, you start strong and unique - and end up as a true demigod.

Popularity: 13A is a great game, but is a niche game within a niche hobby. It has less fans than 5e, certainly, but also Pathfinder and OSR/Old-school D&D for most metrics I can find. It is nice to try new games. It might be harder to find compatible players - always easy to find D&D players where I am.

Innovation and tradition: 5e D&D tries to keep some "classic" D&D features, while 13A has more experimentation and innovation. As far as quality goes, I think both options are equally valid. I prefer 5e's saving throws, for example, but 13A method is good alternative if you want the attacker to make all the rolls.

New school x Old(ish) school: the definitions vary from person to person, and both "schools" have its fans. By most metrics I can think of, 13A is mostly a "new school" game while 5e is mostly a "middle school" game, a "compromise edition" of sorts. Old school has been described by things like "Hero, not Superhero", "Starting characters aren't special", "There is no "story" being created on purpose", not focused on the character sheet, etc. Of course, if you're using different metrics, you'll reach different conclusions.

My favorites: OUT, the escalation die (awesome idea), the monster stat-blocks for 13A; and the action economy, bounded accuracy, backgrounds, and advantage/disadvantage for 5e. The art, for both. Great games overall.

Like I said before, my favorite is 5e, but both games are awesome. Both have SRD's you can find it the internet for free - and, what is better, you can easily combine your favorite features of both games into your own house-ruled Frankenstein system. I do that all the time!

As someone said before me... since we have both options, gamers win!

Did I forget something? Are there other reasons to prefer one game over another? Any other features that can be exported form one game to the other? Let me know in the comments!
Postado por Eric Diaz às 4:54 AM