Review: Liberation of the Demon Slayer

Liberation of the Demon Slayer* is an OSR dungeon adventure by Venger As’Nas Satanis. I bought the 70-page black & white watermarked PDF on impulse a few days ago and, after a quick glance, got interested in reading it cover to cover. 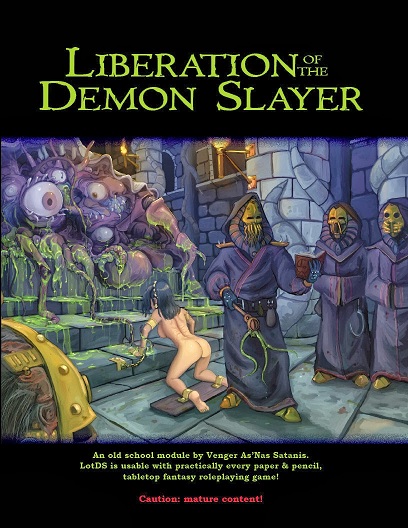 The book contains two main parts: about a dozen pages of various ideas and house rules, and then the adventure itself: a gonzo dungeon, with six levels, preceded by a few notes on the nearby village, relevant NPCs and a rumor table.

The book is not particularly well-organized. It is written in a stream of consciousness manner, with a conversational tone, jumping from subject to subject. For example, we go from setting to house rules and (a few pages later) back to setting again, without turning a page or starting a new chapter between sections. The index has seven entries only, indicating each level of the dungeon and a page explaining how to use "the shapes", powerful artifacts that you can find during the adventure. There is a point in the adventure in which the adventures get teleported (in a very railroad-y manner, unfortunately) from level 2 to an alternate "Level 0" in another dimension, and the whole level 0 is described in the middle of the level 2 chapter, as if the reader was meant to be transported with the text. Some rooms include lengthy descriptions about the NPCs and setting.

This lack of organization didn't detract much from the reading, but it might make things harder for the GM when using on the table.

The B&W art is very good, overall, with a few really impressive pieces (and a few amateurish ones) and decent maps (by Dyson Logos). There are some definitely NSFW pieces, but nothing that will scare you, assuming you looked at the cover before buying the book.

By the same metric, I assume nothing in this book will offend you if you're not looking for that; there is little explicit gore or sexuality, and all of it can be ignored without destroying the adventure. There are also a few subtle jabs at religion, art, etc. I found some of it amusing, and most of it gratuitous, but not too extreme nor too distracting.

Overall, I think the sex and violence of the module is meant to differentiate it from other similar adventures, and, although it succeeds in generating some controversy, is far from the only thing that the book has to offer.

Obviously, if you think the cover is offensive or the the author's pen name is too puerile for your tastes, this book is probably not for you. If you're interested anyway, let us take a look at the contents.

LotDS is a OSR adventure, aimed for the more classic forms of D&D. Venger proposes a number of house rules regarding magic, hit locations, negative HP, saving throws, ability checks, etc. It also has some GM advice on using sex, violence, and weirdness, which is pertinent. Mostly interesting ideas, but some of them seem untested or half-baked, and nothing is really groundbreaking. Regardless of this, I found this section useful to get the feel of Venger's games, which is helpful for understanding the adventure.

There are two highlights in this part: a good breakdown on PC's motivations ("REASONS FOR ADVENTURING") and a very nice dark secrets table, with more than thirty dark, funny and extreme entries, very appropriate to the book but useful beyond the scope of the adventure.

Although it doesn't mention any specific system, LotDS seems like a great fit for DCC RPG, with it's dark humor, high lethality and gonzo awesomeness. If you play Lamentations of the Flame Princess and like their modules, LotDS might also interest you. 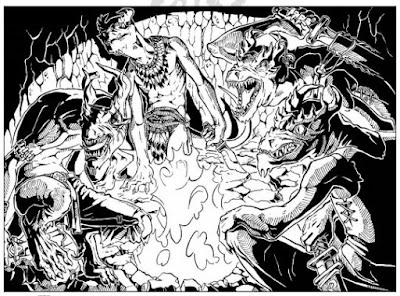 LotDS's setting is both fresh and familiar. In true old-school D&D style, it includes orcs and aliens, demons and "K’tulu", kobolds and laser pistols, magic and super-science, dragons, spaceships and a mind controlling orange. This level of gonzo is probably going to be too much for some people, but others might find it a good way of adding strangeness to standard D&D tropes or changing the pace of the game for a few adventures.

In this setting, religion, demons and magic are deeply connected (an idea that was common in old real world beliefs, but absent in many versions of vanilla fantasy), elves and magic are mostly evil, and demons and devils coexist with Lovecraftian deities. It reminds me of "weird fantasy" settings such as Arduin or Rifts. For my particular tastes, I found the setting has good ideas that can be mined, but not enough coherence to use exactly as written for other purposes (beyond running this particular adventure).

Using a completely alien setting without the gnolls and medusas might make things more interesting, but perhaps this is meant to place the adventure solidly on D&D-land. The author offers some good advice on dropping this adventure in a "standard" D&D setting and then dialing back the weirdness after the finishing the dungeon if necessary.

The adventure is presented in a very straightforward manner, at first: a group of adventures must descend into a dungeon to recover a magic sword (the "demon slayer" of the title) to fight an incoming demonic horde. Fortunately, the dungeon itself is a lot more interesting than the premise would indicate.

Level 1 is a series of caverns; level 2, a flooded dungeon; level 3, a spaceship; levels 4 and 5, dungeons filled with cultists, vampires, dark elves and monsters; level 6, a fire dungeon filled with lava. Although the maps are good, traveling from one level to another isn't clearly explained on the first read. There is also a "level 0" within level 2 that, strangely enough, is a quest to find a magic item inside the quest to find a magic item. You read that right. 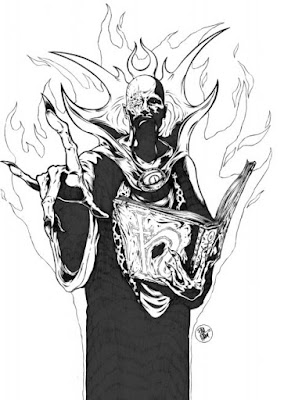 The demon-slaying sword is located on level 1, so there is little explanation on why would the PCs delve deeper. Presumably, after getting the sword and gaining more experience, they would try to find the demons below to stop them from being  menace to the village. In any case, the dungeon is quite big, so there in material for a lot of adventures (the author mentions between 7 and 13 sessions, which sounds reasonable to me).

The dungeon has the same strengths and weaknesses as the setting: lots of fun ideas, not enough coherence. Each level has a clear theme and interesting conflicts and factions, which is good, but the whole makes little sense, which - by the foreword - is intentional. In short, this resembles a classic "funhouse dungeon". The point is not the cohesive whole, but the fun challenges being presented.

In that aspect, LotDS succeeds in what it proposes to do. Facing the dungeon seems impossible by using what is is your character sheet; one must think outside the box, explore (the extremely powerful) magic items, and make deals with various NPC's in order to survive. This is definitely an adventure to challenge the players, not their characters.

It is worth mentioning that the adventure seems very, very deadly, with death rays, powerful monsters and multiple possibilities of TPK. This is better suited for players that are willing to really put their character's lives on the line.

This book was published in 2013. and, as the author seems to admit in the last page, feels a bit like an early effort - although still a good one. It has plenty of useful content, the writing is good and it contains some great art, but it lacks organization, cohesiveness and focus (if that's what you're looking for). It is a decent read and it seems that it would be a fun adventure to run or play - which is the whole point of the module.

If the "funhouse dungeon" premise interest you, or if you like gonzo adventures where anything can happen, I would recommend checking this out.
*By purchasing stuff through affiliate links you're helping to support this blog.
Postado por Eric Diaz às 4:41 AM