Why is Clark Ashton Smith missing from the appendix N? And more...

In my last post I've mentioned that one of the reasons I find the 1e DMG so relevant is that "even the Appendixes generated entire books about them. The Appendix N is the most famous one..."
Here is the Appendix N, BTW. From the first DMG:

APPENDIX N: INSPIRATIONAL AND EDUCATIONAL READING
Inspiration for all the fantasy work I have done stems directly from the love my father showed when I was a tad, for he spent many hours telling me stories he made up as he went along, tales of cloaked old men who could grant wishes, of magic rings and enchanted swords, or wicked sorcerors [sic] and dauntless swordsmen.
Then too, countless hundreds of comic books went down, and the long-gone EC ones certainly had their effect. Science fiction, fantasy, and horror movies were a big influence. In fact, all of us tend to get ample helpings of fantasy when we are very young from fairy tales such as those written by the Brothers Grimm and Andrew Lang. This often leads to reading books of mythology, paging through bestiaries, and consultation of compilations of the myths of various lands and peoples.
Upon such a base I built my interest in fantasy, being an avid reader of all science fiction and fantasy literature since 1950.
The following authors were of particular inspiration to me. In some cases I cite specific works, in others, I simply recommend all of their fantasy writing to you. From such sources, as well as any other imaginative writing or screenplay, you will be able to pluck kernels from which will grow the fruits of exciting campaigns. Good reading!

The most immediate influences upon AD&D were probably de Camp & Pratt, R. E. Howard, Fritz Leiber, Jack Vance, H. P. Lovecraft, and A. Merritt; but all of the above authors, as well as many not listed, certainly helped to shape the form of the game. For this reason, and for the hours of reading enjoyment, I heartily recommend the works of these fine authors to you.
- E. Gary Gygax, 1979, AD&D Dungeon Masters Guide, p. 224

Well, why not Clark Ashton Smith? He was one of the "three greats" of Weird Tales magazine (with HPL and REH), and his writing, to me, fits D&D so perfectly... maybe even more than REH and HPL... it is weird, dark, funny, full of supernatural beings and strange places. He writes of desperate adventures in dying worlds, losing life and limb while facing terrible monsters.
He is also, as far as i can tell, a huge influence on Vance - which was probably Gygax's favorite author.
And I can't help thinking the "geas" spell cames from "The Seven Geases", but I bet you could find many other examples (a Reddit user commented that the shadow monster comes from "The Double Shadow"). The Castle Amber module is explicitly based on Smith's Averoigne. It was written by Tom Moldvay (who DID include CAS in the Basic's version of the Appendix N).
Well, I love Clark Ashton Smith, so this got me really curious. I always thought this was an oversight from Gygax.
But I am obviously not the only one asking that question... 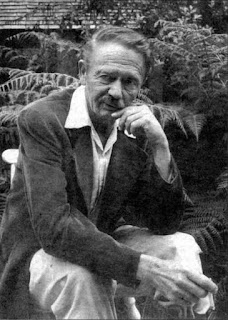 Here is a small excerpt from an interview Appendix N Book Club make with Tim Kask:

Kask: Clark Ashton Smith was one of Gary's favorites. I have read a couple though, on Gary's recommendation, I got to say that was so many years ago that if I … if I… if I saw the title I could… but there are not any that stand out in my head right away.

I have an excuse for that […] I'm probably a problem reader, in that I read so much and I mean I read it at least a novel a week […] I'm a voracious reader and most of its residing back there in.. huh… deeper memory than RAM.

Interviewer: And do you feel like Clark Ashton Smith’s exclusion from the appendix N was intentional or was more of an oversight?

Kask: As I recall, and again I got a beg […] the ignorance of age and disuse, his writing was somewhat ponderous.

First thing I've got to say is that this is well wroth listening. It provides some interesting insight on the choice of authors in the appendix N. Apparently, some were excluded for being too "ponderous", risqué, not family-friendly, or hard to read/understand (which is why we have only 20th century authors). Gor is mentioned as a book series that couldn't have been included for having too much sex, which makes me assume Kask and Gygax were familiar with it (IIRC, Gor was a big influence on Arneson).
The idea, apparently, was listing books that were easy to find and read so people could "get" what D&D was about. These were books people would be familiar with, that children could read without upsetting their parents, etc.
Anyway, before this interview, I had come across some bit and pieces.
First, in Dragonsfoot: I don't know who the authors of the comments are except the one in the middle (Allan Grohe):

Gary was never a fan of CAS. I find it hard to imagine Gary just never happened to read CAS (considering all the stuff Gary DID read), so maybe Gary just honestly disliked CAS or even found CAS distasteful.

That said, there were plenty other authors Gary read and enjoyed who did not make it into Appendix N — E.R. Eddison springs to mind — simply because he didn’t consider them particularly influential on D&D.

IIRC, Rob introduced CAS to Gary, and Gary enjoyed him, but not as much as other authors from Appendix N: CAS may have been too literary in tone and flavor, perhaps? Rob's answering Qs over on DF again, so it's a good time to ask him about that history

Anyway, he may not have been as big a CAS fan as Rob is, but he certainly did not dislike him. Gary was never timid about expressing his opinions with me; if he didn't like CAS, these things would not have made their way into the ms.

"Rob" is Rob Kuntz, one of the earliest members of TSR. Unfortunately, I didn't find a direct answer from him, only this:

Clark Ashton Smith: My favorite fantasy/weird author. The Emperor of Dreams as he was self-styled (re: The Hashish Eater)

If there was ever an author that existed during that period who could have ensorcelled words better than he for both prose and poetry, I am not aware of them.
--
"Connect to" D&D is rather vague phrase, Rossik. I reject the Appendix N list in AD&D as being other than a Recommended Reading list by EGG and not as what influenced major aspects of D&D. His 1911 set of Encyclopedia Britannica, which I read quite often, were more influential in that regard. As far as inspirational matter, that's a bird of a different colored plumage. For me it's all of the Mythos/Weird authors, and I place as most high on that list and right alongside Lovecraft, Clark Ashton Smith. Derleth fits in; and so does Robert Bloch. Then one can march down the Arkham House backlist and start pegging the rest. Manly Wade Wellman is the overlapping WT author from the first to second wave in that magazine, and quite honestly a great writer of the weird and supernatural in his own right and sorely overlooked until recently.Robilar, Vanquisher of Dragons

So, not much clarification about Gygax here... but interesting stuff nonetheless.

There is also this episode of Sanctum Secorum, with Ernie Gygax, where he mentions the Appendix N as just a list of books Gary had on his shelf - and Clark Ashton Smith was not one. He does mention Gor as a book series that have been omitted on purpose.

What to think of that? Well, Tim Kask makes a good case for the choices in the Appendix N being very deliberate. He would know, since he helped Gygax in writing AD&D. It makes sense that Eddison would be excluded for his incredibly demanding prose (much more than CAS). It's difficult to say whether Gygax liked CAS or not... but I would think a mere dislike is not the reason for the exclusion.
EDIT: two people commented on social media that Gygax didn't like CAS, whilethers .sy he hadn't read CAS by 79. I'm looking for sources so I can add them here.

Why do I care? I have no idea. It is just a curiosity I have, am happy to have learned a bit more about the appendix N, and maybe other people would find this useful
BTW, you can find Clark Ashton Smith's stories for free, online. Now go read them and tell me what you think! You can start with The Vaults of Yoh-Vombis, one of my favorites, or The Beast of Averoigne, The Tale of Satampra Zeiros, The Empire of the Necromancers, The Isle of the Torturers, The Abominations of Yondo and so on. Each of them is both great fun and perfect inspiraiton for your D&D games.
If you haven't read those... you can thank me later! ;)
Postado por Eric Diaz às 5:33 PM