Cha'alt: Fuchsia Malaise* is a sequel to Cha'alt, an OSR with "weird" and "gonzo" settings turned to eleven (this thing is strange!). Here is part of the blurb:

Cha'alt: Fuchsia Malaise is a continuation of the Cha'alt campaign setting and dungeon extravaganza. Eldritch, gonzo, science-fantasy, post-apocalyptic awesomeness compatible with the original RPG all the way up to 5th edition.

In this book, I detail the city of A'agrybah, along with various adventuring locales - the largest being an offworlder high-tech facility called Elysium. Lots of gorgeous maps, random tables, NPCs, magic items, and monsters.

Why did I buy/read this? The author offered me a review copy (we interact very occasionally on social media). I reviewed some of his stuff in the past and I must confess I was curious. I like some weirdness in my games, and I find most modules I read a bit tame on that regard... while Cha'alt, like it or not, is seldom tame about anything.

First, let's get a couple of things out of the way. This is very much in the same tone to the first book in the series, and chances are you'll like both, or neither. So, take a quick read at the first review if you want to know what the first book is about. The books CAN be used separately, but they complete each other nicely. This second one is in many ways more polished, interesting, and useful for non-Chaalt games than the first, but the first has the Black Pyramid, the setting's most important place.
If you are curious, it might be a good idea to get this one first. You can explore the setting a little, and if you like it get the first one to plan your expedition to the Black Pyramid.
A second thing I'll mention is that this is NOT exactly compatible "with the original RPG all the way up to 5th edition". It is an OSR game, with decent OSR stats, and that's about it, except for the appendixes (see below). Of course, adapting it to 5e is not hard if you ahve some experience with these systems.
It has some 5e-isms in layout, etc., which I didn't particularly enjoy; but if you like this aspect of 5e, you might like this. In fact, I think Cha'alt's approach to layout, changing colors from one section to another, is in some aspects more interesting than the average 5e book.
What is Cha'alt?
As we've seem in the first review, Cha'alt is a deserted alien planet based on "post-apocalyptic fiction such as Dune (lots of Dune), Dark Sun, Carcosa, etc., plus Lovecraft and others". BTW, now we also have demons, which I might have missed the first time around. These are actual demons, that come from Hell to tempt your characters. In a setting that already has aliens, elves, cyborgs, spaceships, and lovecraftian monsters (not to mentions brothels, pizzas, communists, and "The Author" appearing as a NPC). We ALSO get "crimson space demons with horns, cloven hooves, and black eyes", but these come from space... so probably unrelated.
If this sounds like too much, this book is probably not for you. If you LIKE this level of weirdness, you'll hardly find it anywhere else. Cha'alt remains quite unique, as far as I can tell.
And some of the premises are really interesting. I like the idea of an expeditionary base exploiting a strange planet, and the factions that come out of it. Some want to protect the planet, others want to join the galactic federation, some want to go rogue, some want to get rich (despite the environmental price), some want to awaken the elder gods that can destroy everything... It has the features of a good setting: factions, a flexible social order, shades of gray, etc. 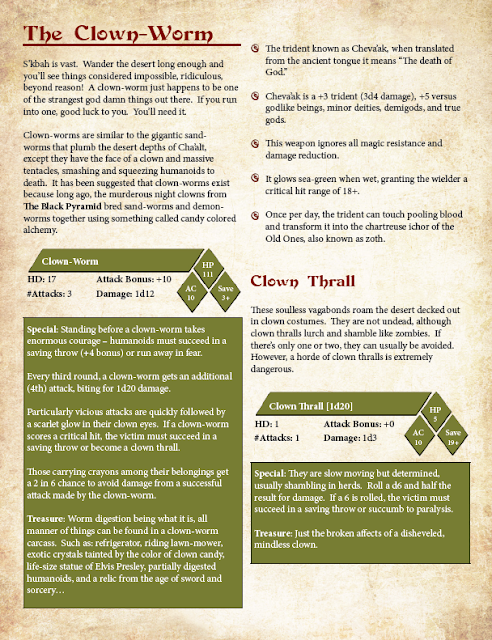 What does this book add to the first one?
Quite a lot, actually.
It starts with a (random) collection of random tables, meant to generate NPCs, plots, and so on. The new races are more interesting than the ones in the first books, and I like the new NPCs and PC/NPC traits a bit better this time around. We have names, backgrounds, social class, and so on.
There are some random tables of "house rules" of sorts: tables for reactions, morale, loyalty, disguised attempts, a table to tell you if the PCs fall in love... I found those unnecessary (I'd assume you already have them from other games) and not particularly interesting. Then there are tables about drugs, diseases, visions... which are fitting.
Then, we get the setting parts: a city, some dungeons, locations, encounters, etc. I found this quite useful. The first time I've read Cha'alt I felt like I didn't know where to start, but this has plenty of small things you can use to fill your sessions before the players march to the black pyramid.
The whole thing is uneven like the first one. Great art, bad art, cool layout, interesting ideas, silly jokes, things that could be inserted into any RPG setting and things that have no place in any RPG book. Once or twice, while reading this book, I've manage to visualize a world in which all of those disparate elements could form a coherent, awesome whole. In my mind, it looked like something out of The Hyperion Cantos or Dying Earth. All things considered, I think this could become a great campaign, but I'm not sure it would be easy to run.
The Appendix includes "Crimson Dragon Slayer D20", "Cha'alt Ascended", and "OSR Like A Fucking Boss".The first is an updated version of the rules included in the first book. If you like my "minimalist D&D" posts, this in an interesting take. The second is a collection of feats. They are all over - some are good, some are useful, some make no sense, etc. The third is a collection of OSR advice that's quite sensible for the most part.
OVERVIEW (explanation here):
Useful? It should be obvious by this point that this book is very useful if you like your games weird and funny. Even if you do not want to play in such a strange setting, there are good random tables that you can use for other types of weird games - especially the NPC tables. These are really good.
Inspiring? Yes, in a strange way. It got me thinking of how to use these ideas in my own games, which is definitely a plus.
Bloated? Not really. It contains a lot, but not a lot of filler.
Tiresome? The book is not exactly tiresome, but it does make you roll your eyes in some passages. If you dislike crude humor, puns, sarcasm, etc., this is not the book for you. Overall, I think it has enough interesting stuff to keep you engaged.
Clear? Mostly. The book contains a good Table of Contents and a good Index, which I really appreciate. It is not particularly well organized, and some entries are not in the Table of Contents for some reason ("NPC traits" is in the "Pandorum" chapter... or... are there chapters? anyway...). The map is simple, good-looking and effective.
In short: If you want to read something strange, funny, and unpredictable, you might like this one. If you liked the first one, you'll certainly like this.
* By purchasing stuff through affiliate links you're helping to support this blog.
Postado por Eric Diaz às 8:09 AM