In order to remake the 5e weapon list (click here to know why), let us pick it apart.

I'm obviously not the first one to do that, not by a long shot. Here is a very good breakdown, for example, but there are many others.

The basics are clear enough: one handed weapons melee weapons deal 1d6 damage, 1d8 if martial. Bows are basically the same (but require two hands), although other ranged weapons are a bit different.

There is also price and weight. Price is mostly an afterthought once you've got a few levels, but you can take it into consideration for world-building reasons, etc. Weight is also important provided you're tracking encumbrance. But none of the two should count as a "positive" or "negative" property by itself; otherwise, the PCs would be walking around with expensive 20-pound swords to inflict maximum damage.

But the other properties are also NOT equal. So let us consider some of them. 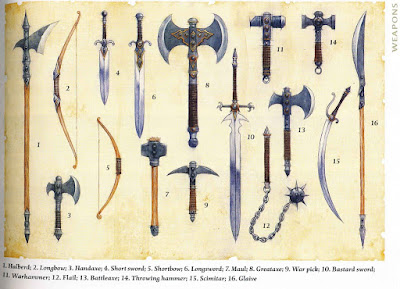 Light/Heavy - light weapons are only good for dual-wielding, and heavy weapons are only bad for small characters. The effect of these properties are therefore a less important than the rest.

There is a caveat, though: the Great Weapon Master makes heavy weapons significantly stronger. So, the "heavy" property is not really a strictly negative property.

Note that light/heavy weapons, curiously enough, have nothing to do with weight, but SIZE (or bulk): "A heavy weapon’s size and bulk make it too large..."; "A light weapon is small and easy to handle...".

Finesse - this is a big one. Strength has few advantages over Dexterity in 5e, and making finesse weapons a bit weaker guarantees there will be some strong warriors going around.

Take into consideration that, since ranged weapons use Dexterity anyway, the "thrown" property is less valuable when combined with this one (see below).

Thrown - Thrown weapons are useful, but ranged weapons have better range, and drawing a new weapon is a bit problematic (there is debate of whether you can draw a new weapon as a bonus action, reaction, or extra attack, for example). There are no good feats (like the excellent Sharpshooter) for thrown weapons, so they are generally worse than ranged weapons.

On the other hand, thrown weapons have limited damage - probably to avoid Strength characters to dominate ranged combat.

Fortunately, ranged weapon with the thrown property are so unique (the dart is way cheaper than anything else, and the net doesn't cause damage) that they should be considered separately.

(Off topic, but... what IS a dart anyway? It is not a javelin, nor does a pilum (a type of javelin) or anything similar would weight 0.25 lb. I guess the answer is probably "shuriken" or most likely "kunai ninja darts". The fact that it is a simple weapon causes the same damage than a dagger is quite strange) 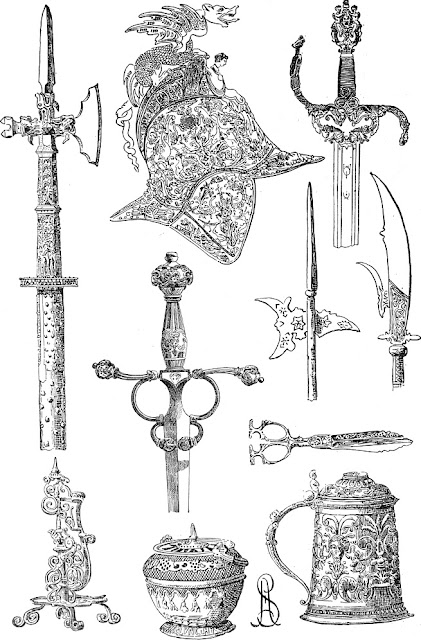 Versatile/Two-handed - versatile is a good property to have... but not great, since you are unlikely to change between one and two hands very often during the same combat. If you make it two valuable, people will prefer carrying two different weapons. Two-handed is a heavy downside - you lose +2 AC because you-re not using a shield.

The situation is different for ranged weapons. Most ranged weapons require two hands anyway, so a "one handed" property would make more sense here. Shields are usually less important, since there is a distinct possibility that your enemy cannot fire back immediately- and the errata explains you need a free hand to use a one-handed weapon with the ammunition property anyway.

So this "one-handed" property would be a bit less valuable than it may appear.

Loading - this property is a real problem for characters that have more than one attack per turn (even though it can be ignored by the Crossbow Expert feat). In short, very bad for most characters that rely on weapons to cause damage, but good for rogues, etc. The only weapon with this property other than crossbows are blowguns... which are outliers. In any case, the effect is pretty clear: crossbows damage is usually one step greater than bows.

Greater/smaller damage - 5e has six damage "steps": 1d4, 1d6, 1d8, 1d10, 1d12 and 2d6. Each step should usually count as one negative or positive property. Even though the difference between 1d12 and 2d6 seems small, the Great Weapon Fighting style makes 2d6 as valuable as the other steps for those who have it.

In my opinion, if we had 1d2 and 1d3 damage it would be a lot easier to deal with improvised weapons, shield bashing, shurikens, brass knuckles, kicks, punches, etc., but that is something I'll have to analyse later.