We have analyzed 5e fighting styles. Let us try improving it.

Here is a list of 10 fighting styles that are popular in fiction, real life or older editions, etc. but useless, nonexistent or clearly sub-optimal in 5e D&D:

Before saying that 5e D&D doesn't need all these fighting styles please consider that, as I've said before, holding a quarterstaff or lance in each hand is a viable tactic in 5e, while sword and main-gauche is not. 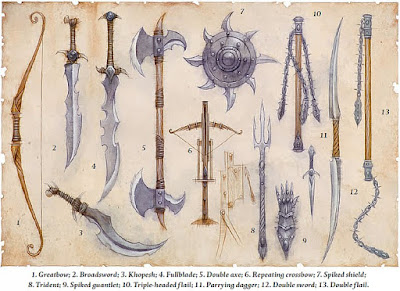 It's been a while since the PHB was released, and there is no clear sign that there will ever be an official hoplite in 5e - except for the Weapon Feats in the Unearthed Arcana.

So, if these styles ever come into play, it will be trough feats - and after we get another 200 new spells, since apparently there aren't enough spells already. If anything, the feats we already have indicate that there will be NO new weapons - instead of a d8 "heavy spear" we get a feat that causes a spear to deal 1d8 damage, for example.

Fortunately, some of this stuff is easy to fix, and some of it has enough precedent in Pathfinder and other games (although Pathfinder is far from "easy" IMO). There might also be an an easy solution to ALL these problems at once - inspired by the Rules Cyclopedia and even 4e. But I'll tackle this after I've analysed all missing fighting styles.

I'll try to explain each style separately and make them work in 5e with homebrew feats and equipment (and comment on the UA feats we already have) - for now, I've added some "tags" after each style to give you an idea about what I'm talking about.

I will leave "useless" weapons (such as the mace or trident) for a later post.

I'm seriously considering making no alterations to the rules, only additions, but that remains to be seem.

Are there other styles that you'd like to see in 5e? If I missed anything, let me know in the comments.

All images copyright of Wizards of the coast.
Postado por Eric Diaz às 6:29 AM