The Bone Age is an OSR RPG system and setting, planted firmly in the "weird" tradition (it's in the cover after all...). I read the PDF, and recently a print version has been made available. Here is the blurb:

The Bone Age is an old-school RPG of neolithic-era tribes struggling against the sudden arrival of bug-eyed aliens. You play a Tuzanian, a tribe of jungle-dwelling, vine-swinging, pterodactyl-riding, bone-wielding savages, or a Cruach, giant-crab riding cave-dwellers living in mountains bordering the jungle. Radiation leaked from the Invaders' crashed flying saucers spreads on winds of purple, blue, and white, mutating the land and its inhabitants. Meanwhile, a race of turtle-apes and ape-turtles sleeping in stasis beneath the surface awoke...1,000,000 years later than planned. And they were not impressed by the native population – or the alien Invaders.

Why did I buy/read this? The awesome cover by Jack Badashski piqued my attention (I used some of his art in my Wretched Hive). It was also OSR, interesting premise, on sale, etc. The art inside is also great - just take a look at the preview! 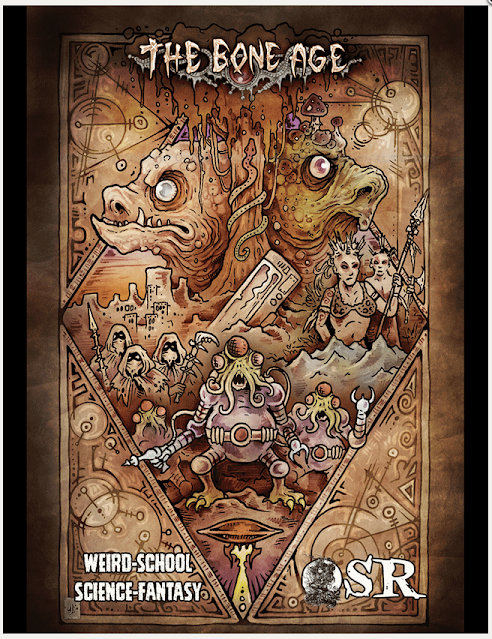 It's as weird as you would expect, full of fun stuff, but not much comedy. Which is a plus in my opinion - despite being strange and over the top, the setting takes itself more or less seriously. It is less bleak and violent than Carcosa, less humorous and raunchy than Cha'alt - and if you like this description, you'll probably like this book. It feels a bit tamer than both, but it manages to avoid the usual Lovecraft tropes, opting for something more distinctive.
The explanation about how things came to be is short and sweet. Which is fine, since I assume the primitive PCs wouldn't understand easily the cosmic conflicts that caused the situation. One interesting thing about the setting is that the Earth is alive and unhappy with all this chaos, causing further problems (sandstorms, earthquakes, etc.)
The characters are the most interesting bits here. Most of the book focuses on the the dinosaur-riding, bone-collecting tribes and classes, and all the kinds of mutations your character can get. Spells, alien artifacts, and monsters get relatively little space in comparison. There are no "races", but only two (human) cultures.
The book itself spends little time describing the setting directly - the gazeteer takes about half a dozen pages. Instead, you "get" the setting while reading about character, classes, monsters and the rules of the game. For example, instead of "saving throws" you get "abilities" such as Alien Tech, Beasts, Resist Mutation, and Survival. In addition, you get six "stats" that are familiar enough (Agility, Constitution, Instinct, Intelligence, Strength and Will. Other than that you get HP, AC, etc., as usual.
Some of these choices are a little curious, making the game familiar but not exactly compatible to other popular old school games. It is a decent system, however, perfectly suited to the setting.
The setting is a bit small and focused - which is not necessarily a bad thing. There are few monsters (each with 1d4 mutations, which is great), for example, but plenty of good monster-generating tables.
The book looks fine. The interior is mostly black and white with sparse but flavorful art. The layout is clean and easy, and the colorful map looks great. The most obvious downside is the lack of a Table of Contents, something I cannot understand. Also, the appendix (GM tools) seems to follow no rhyme or reason: Plot Ideas, then Toxins, then creature Creation... it is small enough that this doesn't cause a huge problem.
OVERVIEW (explanation here):
Useful? The book is useful if you like the premise and want to try a new OSR system and setting. Its usefulness with other OSR games is less certain - there are good ideas to mine, specially if your running something in the vein of Dark Sun or Expedition to the Barrier Peaks, and most of the system (especially monsters, items, etc., but NOT the PCs) are easily adapted.
Inspiring? Yes. It's a cool book, full of fun ideas. I like the art, I wish there was more of it.
Bloated? No, the size is decent, the system is light, if anything I'd add more content (especially monster art). The books if focused on a planet that could be a small region, and could be ported to other settings.
Tiresome? No. It has the right amount of weird and funny.
Clear? Well, the lack of a table of contents is really bad. The book isn't that easy to navigate - only pages 79 and 80 indicate which chapter you're reading, which is probably a mistake. The layout is clean enough, and it mostly sticks to the "one thing per page" rule, and things follow a more or less alphabetical order. Reading it is fine, but referencing it isn't easy.
In short: If you're looking for a small setting with aliens, Neolithic tribes, mutants and dinosaurs, this one might be for you.
* By purchasing stuff through affiliate links you're helping to support this blog.
Postado por Eric Diaz às 6:33 AM