Unkown Armies (deal of the day)

Today's "deal of the day" is Unknown Armies*. This is only "book one", apparently for players - book two is the rules, and there are several additional books for the setting.

This is the Third Edition of the game, which I haven't played. I did play second edition. It is one of the greatest horror RPGs I've ever played - and the competition is fierce (Kult, Call of Cthulhu, etc.). 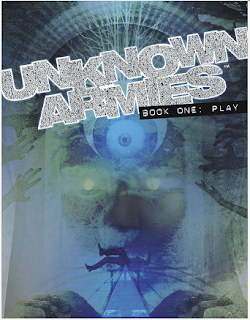 The book is especially noteworthy because of the sanity mechanics; you do not only get crazy or traumatized, you get hardened against certain horrors, which makes you better at facing them... but also makes you look like a psycho, since you can become somewhat indifferent to human suffering, weird occurrences, etc.
However, I found the entire system pretty sweet. Simple d100 stuff, but very efficient. Quite minimalist - the way I like it!
At the time I was playing it, it was a system more to my liking than Call of Cthulhu or Kult (2nd edition) - and I even considered using it for medieval fantasy games.
The setting is very interesting too. It deals with postmodern/chaos magick, archetypes, secret societies of perverts and freaks...
It has a unique take on horror. Very anthropocentric; monsters, demons and alien creatures play a smaller part here than in other horror games. Instead, it focuses on sanity, attention, belief, misdirection... in some aspects, it reminds me of Mage:The Ascension (but also Harry Dresden, Hellraiser, and a bunch of other stuff).
Anyway, a great horror RPG is you're looking for one.
*Affiliate links - by using them, you're helping to support this blog!
Postado por Eric Diaz às 9:26 AM