Should monsters "know what they're doing"?

I haven't read much of The monsters now what they're doing, but I like what I've seen.
It seems to be a collection of "combat tactics" at a first glance (i.e., how the monsters should behave in combat for optimal party-killing), but on a second glance it's actually a lot better than that: it contains relevant reflections about whether the monsters should fight (and continue fighting) in the first place:

When a corpse flower is seriously wounded (reduced to 50 hp or fewer), its self-preservation impulse kicks in to tell it that it’s not going to survive just by digesting its corpse collection. Lacking the Intelligence to Disengage, it Dashes away in whichever direction it senses the fewest enemies in.
(Bone knight)
Their Charisma is high enough that an encounter will probably involve some measure of parley, and maybe only parley—they understand, after all, that it’s better to get what you want without fighting if you can—but their social skill proficiencies are in Intimidation and Deception, so we’re not talking about good-faith negotiation here. Instead, this combination suggests to me that they’re about trying to get their opponents to capitulate, through a combination of outright bullying and more subtle manipulation. Any rhetorical maneuver an abuser might use is right up the bone knight’s alley: direct and indirect threats; negative reinforcement; false accusations; gaslighting; DARVO; demonstrations of explosive anger and sudden, unpredictable violence; dividing enemies by singling out individuals among them for particular blame; and so on.

I feel that this kind of reflection is even more valuable that "monster tactics", because it's more scarce in the "official" D&D 5e books. If anything, I'd like to see more of this kind of material instead of monster strategy and tactics. 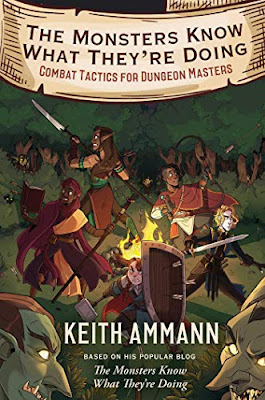 Which is why I've added a chapter on "Roleplaying Monsters" in my Teratogenicon book, including all the stuff that I find lacking in 5e: reactions, morale, encounter distance, etc. Here is a bit:

Each monster has its own capacities, knowledge and
goals. Most monsters know nothing about the characters
and their powers, even if the GM does. Do not fall into the
trap of assuming the monster will always come to the right
conclusions. “The old guy with a staff is probably a sorcerer”
should be an uncommon line of thought – instead, he is
most likely someone that needs a walking aid, at least until
he casts a spell. A huge fighter with a sword, on the other
hand, is clearly someone you should watch.
Once the player characters start fighting and using their
abilities, some things will become obvious, and monsters
will react accordingly. Still, most monsters will not be able
to see the whole picture at once. One easy way to dealing
with this is assuming most monsters will attack whoever
hurt them most (individually, not as a group) since their last
turn, unless they have an obvious reason to do otherwise.
A good leader or tactician can change everything – he
can order the other monsters to work as a group, making
the best choices for their side even if he needs to sacrifice
a soldier or two. A good plan will make monsters ten
times more dangerous, at least until it is derailed. A careful
study of the PCs tactics will give the monsters an edge
(and vice-versa).

I've heard people say that there is no real "balance" in any D&D fight - if there was, the monsters would win about half the time! That's a fair criticism. "Balance" is a bit of a misnomer if the monsters are punching bags, meant to die in order to spend the PC's resources.
On the other hand, it might be worth remebering that monsters aren't traps. Their have their own issues.
Why should every monster be waiting behind the door to kill the PCs? Why should they picks fights with someone more powerful (or even less powerful) that often? Should ma lion be an expert on fighting PCs... or hunting deer? Why should monsters be "fresh" for every fight? If PCs - who are, more or less, rational beings - get into half a dozen fights before dinner, how often would chaotic evil creatures fight each other? Why is it so rare to find wounded (or malformed), starved or cowardly creatures in published modules?
Then there is personality, society, diet, habitat, etc... D&D 5e is not particularly concerned about these issues, as we've seen. This makes monsters feel a bit one-dimensional unless you choose to do a "deep dive" like "The monsters now what they're doing" does.
Anyway, this makes me think that maybe monsters should sometimes choose suboptimal tactics. Maybe they are dumb, feral, os just desperate. They do not know that this is their last fight - why should they use every resource they have against the PCs?
But this is a heavy burden to place over the shoulder of the GM. You cannot consider whether each monster has eaten or fought that day, or whether he is scared enough after a couple of wounds to keep fighting.
That's why having specific procedures in place is very helpful. In addition to reaction, morale, and rolling randomly for HD before a fight, assigning random tactics and attacks is also an interesting idea. It is something that 13th Age and Low Fantasy Gaming do: "if the dragon rolls a 19, it uses breath weapon", etc. This is also helpful to overcome the urge to adjust the monster tactics to the convenience of the game (for example, making monsters fight more efficiently if the fight feels too easy, or, covnersely, "pulling punches" when you want to "save" the PCs).
Well, I guess this is something to consider for my next book - a collection of monsters inspired by Brazilian folklore. The first one has long claws, cloven hooves, the head of an anteater and subsides on small kittens and human brains. Stay tuned!
Postado por Eric Diaz às 9:39 AM