The original D&D reaction table is one of the most important components of the game, and it is often ignored in modern versions (starting on 3e). I feel this table is fundamental because it "activates" other parts of the game, such as Charisma and languages, and adds an entire new dimension to monsters: they are not only bags of XP, but individuals who are as likely to be helpful and to attack on sight.
Teratogenicon has an entire chapter on roleplaying monsters. Here is my version of the B/X table, included there. It's basically the same thing as the original, with a few additions to account for various circumstances (for example, a weak monster shouldn't usually attack a bigger one on sight): 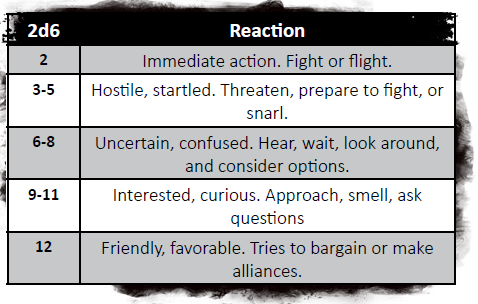 Anyway. As you can see "attack on sight" is very rare - one chance in 36. Which is good, IMO - it leaves for room for interaction before combat. Bribery, distraction, negotiation, etc. "Immediately helpful" is equally rare. So, in most circumstances, you have to evaluate what to do.
It works perfectly.
Well, with some caveats.
In B/X, this roll is modified by your Charisma. From the OSE SRD: 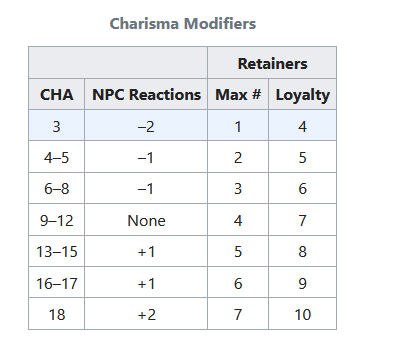 First, the "-2 to +2" modifier breaks the elegance of the "-3 to +3" in almost every other ability.
This is necessary, however, as most abilities modify d20 rolls, and this one modifies 2d6. A -3 or +3 here would be HUGE; a +5 (which is possible if you're playing Dark Fantasy Basic, for example) is basically impossible to use, as it would turn every monster into an ally or a neutral creature at worst.
Second, you have to be careful when using this. OSE, attempting to explain B/X, says this on the matter:

Charisma: If one specific character attempts to speak with the monsters, that character’s NPC reactions modifier due to CHA (see Ability Scores) is used to modify the monster reaction roll.

This is sensible. It doesn't mention languages, but should be obvious: it is hard to communicate if you don't know the monster's language. What's more, it is probably hard to talk to a monster that attacks on sight. So, even with a positive Charisma, there is a chance of immediate attack.
But then there are some issues.
First, negative Charisma means a PC should never attempt to communicate - it might make helpful monsters turn on him immediately.
Second, if the reaction determined by circumstances, as suggest above, Charisma doesn't affect the reaction at all - at least if you use rules as written.
The reason that this still works is because interactions are represented through roleplaying, not die rolls. But sometimes it might be cool to play a silver-tongued character, such as bard, mountebank or leader... without necessarily being a silver-tongued player.
The solution, IMO, is tackling this from a different angle: Charisma doesn't affect reaction rolls. Reaction rolls are for the GM alone. Charisma affects attempts to change the monster's behavior.
Which method you use to handle it is a matter of preference. I might use target 18, with -3 to +3 from Charisma, and the usual +4 to -4 from circumstances. Offering food or treasure definitely helps. A success means the reaction improved by one step (from hostile to neutral, for example). Further negotiation is needed to improve it further. A d20 roll also leaves space for class bonuses, feats, or skills (see Persuasion in DFB, for example).
Now, this is important: most of the process is still role-playing. It is only when the GM is unsure of the result that the dice come out. But when they do - then the charismatic PC has a decent advantage.
This has another upside: charisma only "activates" when players want to make an effort. The roll is delayed, sometimes ignored (if the offer is good enough). This feels more natural and useful - there is a space between "see how the monster feels at first" and "see how the monster reacts to the PC's offers". The second roll is informed by the PCs approach - a threat, for example, may cause a monster to be "helpful", but this is completely different than being helpful at first sight.
Finally, this leaves 2d6 rolls for the GM, with some exceptions (turn undead, morale, loyalty). come to think of it, morale and loyalty might benefit from a similar approach. But that's the subject for another post.
Postado por Eric Diaz às 5:00 PM