This is an excerpt from various sections of Alternate Magic. I leave it here for easy access when people ask me how to implement spell points in OSR systems.
---
At low levels, this is nearly identical to the existing rules. At high levels, casters gain some versatility (they can cast the same spells more often) but they can memorize and cast fewer spells.
If you use this optional rule, the number of spells learned is simply equal to caster level (minus one for clerics). For example, a 5th-level magic-user knows five spells. Spells only need to be memorized once, and they are automatically remembered daily. With the exception of first level spells, each caster can only learn two spells per spell level (a 10th level MU knows 10 spells, usually 2 for each spell level from one to five).
The maximum spell level that spellcasters can cast are unchanged*:  for elves and magic-users, maximum spell level is equal to half their level (round UP), while clerics is the same but round DOWN, to a maximum of five. Clerics do not rely on grimoires but can only memorize a limited number of spells, like other casters.
(*except for the cleric; see here if you want to know some of the reasons).
A 5th level magic-user, for example, can cast 3rd level spells. A 10th-level cleric can cast 5th level spells.
---
Spell points
Spell points (SP) are the first alternative to spell slots. Under this system, casting spells require spending SP equal to the spell's level; a 3rd level spell, for example, requires 3 SP to cast. Check the table below to see how many SP each class gets.
If you do not want to use a table, calculating SP is easy: for odd levels, it is maximum spell level times itself (for example, 9 SP for a 5th level magic-user). For even levels, just add your maximum spell level to the previous total (for example, 12 SP for a 6th level mage). If you reached your maximum spell level, you only gain a number of SP equal to your maximum spell level for every new level.
Spell points are fully replenished after a full night of sleep. 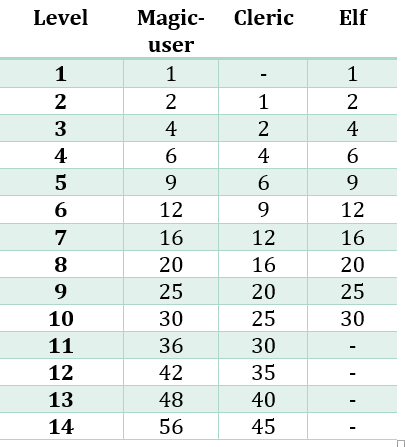