And now for something completely different... Let us talk about Disney princesses.

This is just something that I have get out of my system, by the way. Don't expect it to make any sense.

Yeah, watching "Frozen" for the hundredth time makes funny things to your mind (most of my readers will probably understand my situation right away). I never thought I would say that, but if don't want to hear me rambling about Disney princesses, you might want to skip this post.

And if you LIKE Disney princesses, well, you might wanna skip it anyway... Although I have probably watched this movie for 50 hours I don't think I ever watched from beginning to end. Feel free to correct me if I get something wrong or just don't "get it" at all.

This movie might make a cool setting (pun not intended), I guess. First thought that comes to mind is an evil versions of Elsa, of course.

"Evil version"? Well, she already creates gigantic monsters (to drive her sister away!), destroys summer and almost kills the soldiers who attack her over this. This is probably the whole point of the movie, Elsa being a "subverted" version of the evil queen trope, she is just misunderstood yadda yadda...

You probably realized Anna is a lot more popular here at home. She has all the qualities of a good PC. Brave, foolhardy, impulsive, willing to fight against impossible odds, and with all the sense of responsibility a confused teenager.

In any case, when I heard this was based on a tale by Andersen, I knew the original would be far darker.

So see if you can use this is your games:

An evil troll, called "the devil",[2] has made a magic mirror that distorts the appearance of everything it reflects. It fails to reflect the good and beautiful aspects of people and things, while magnifying their bad and ugly aspects. The devil, who is headmaster at a troll school, takes the mirror and his pupils throughout the world, delighting in using it to distort everyone and everything; the mirror makes the loveliest landscapes look like "boiled spinach." They try to carry the mirror into heaven with the idea of making fools of the angels and God, but the higher they lift it, the more the mirror shakes with laughter, and it slips from their grasp and falls back to earth, shattering into billions of pieces, some no larger than a grain of sand.

These splinters are blown by the wind all over the Earth and got into people's hearts and eyes, freezing their hearts like blocks of ice and making their eyes like the troll-mirror itself, seeing only the bad and ugly in people and things. 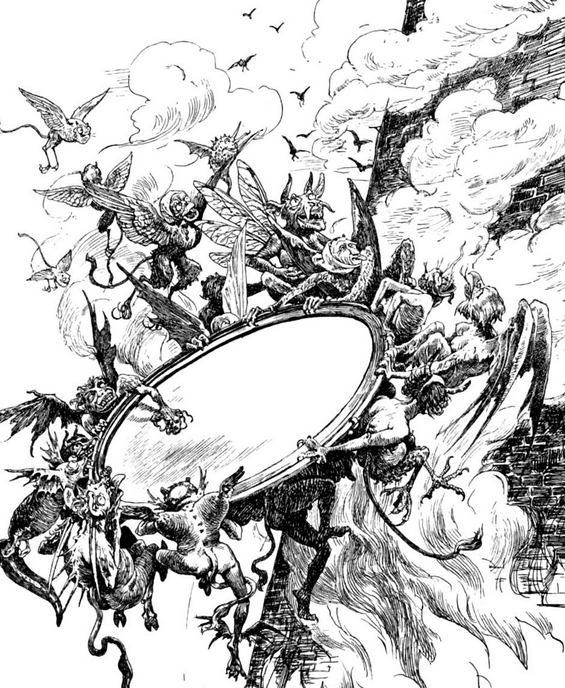 Not bad, huh? The rest of the tale is about two young children (Kay and Gerda) in a large city, so I would prefer Anna and Elsa in my game.

Well, just Elsa. Anna, of course, is a frozen statue since Elsa's puberty. Elsa didn't want this, of course, but Anna was being so annoying at the time...

Now Elsa sits in the frozen throne of Arendelle, surrounded by ice zombies, murderous snowmen and the ghosts of the people she killed in her rage. Ice dragons and polar bears are also fair game, of course.

So there is how you insert Death Frost Doom after one the adventures from Daniel Bishop's FT series, if you ever needed a reason...

How would one defeat Elsa? It is not going to be easy. Andersen describes a few interesting powers:

Kay's grandmother tells the children about the Snow Queen, who is ruler over the "snow bees" — snowflakes that look like bees. As bees have a queen, so do the snow bees, and she is seen where the snowflakes cluster the most.
[...]
Outside the city she reveals herself to Kay and kisses him twice: once to numb him from the cold, and a second time to make him forget about Gerda and his family; a third kiss would kill him.

Maybe the Queen of Summer can help?

Gerda next visits an old sorceress with a beautiful garden of eternal summer. The sorceress wants Gerda to stay with her forever, so she causes Gerda to forget all about Kay, and causes all the roses in her garden to sink beneath the earth, since she knows that the sight of them will remind Gerda of her friend.

Or maybe not...
In the end, it is all about the power of love.

Gerda finds Kay alone and almost immobile on a frozen lake, which the Snow Queen calls the "Mirror of Reason", on which her throne sits. [...] Gerda runs up to Kay and kisses him, and he is saved by the power of her love: Gerda weeps warm tears on him, melting his heart and burning away the troll-mirror splinter in it. As a result, Kay bursts into tears (which dislodge the splinter from his eye) and becomes cheerful and healthy again with sparkling eyes and rosy cheeks, and also recognizes Gerda.

So yeah, like in the movie, the PCs must find a way to melt the Snow Queen's heart. Kissing her is a specially bad idea, as her kisses are deadly and she doesn't appreciate being kissed against her will. Maybe some story or object from her past will do the trick, who knows.

If they succeed, Anna will be released from the ice. She is alive and well. Elsa will run to her and cry, abandoning all defenses. With the ice melting from her heart, filled with nothing but love and oblivious to anything but her sister, Elsa is finally free, and vulnerable.

For about one minute.