Overall, I like the idea of skills points, NWPs and even feats. It's nice to choose how your character progresses, to customize it to your own tastes, to use his adventures as inspirations on which skills to improve, etc. When I started playing RPGs, I was told I could create any character I wanted, and I did. This affected my whole gaming experience.

On the other hand, I really liked those old school modules when you could just say the NPC was a "Fighter 8" and that was enough information about his stats. One of the things I dislike about 3.x and Pathfinder (and WotC D&D in general) is the huge stat blocks, with unending powers, feats, and so on.

For my games, I prefer "single digit characters", like that Fighter 8; they're even simpler than my single digit weapons.

So, a Fighter 8 usually has 8d8 HP and a +8 attack bonus (or something similar). It's pretty much all you need to know for combat. But what if you're using skills?

One solution is creating a simple formula for those skills, like the one we use for attack bonuses (BAB / THAC0 / etc). For example, B/X uses a 2/3 progression for Fighters, 2/4 for clerics and thieves, and 2/5 for magic-users. In Microlite games, you just add your level to your skills "if the character is attempting something directly related to their class" ("primary skill roll"), 1/2 if attempting something loosely related, and 1/3 if not related at all. This progression (1, 1/2, 1/3) is also what I use for Fighter. Cleric/Thief and Magic-User (MU) attack progression as well.

This works quite well if you're using d20 skills, of course; not so much with the 2d6 skills I use. Also, it is very "level-centric", leaving little room for ability modifiers. 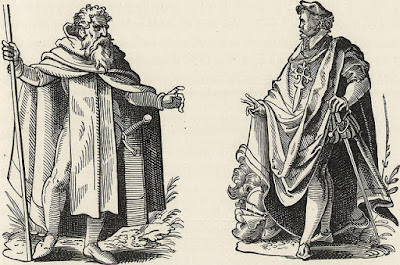 So, here is my formula: only use "primary" skills for d20 rolls and Turn Undead (since the cleric is supposed to be able to turn monsters with the same HD as their level - although, to be honest, I might prefer the LotFP approach of using it as a spell instead of having a whole sub-sytem for this purpose). Everything else gets taken down a notch: thieves skills are based in level/2, for example.

Level/2 is also a good fit with any roll that takes spell level into account; for example, a 8th level MU can cast 4th level spells. Clerics would use Level/3 (they would become a little weaker but, hey, they are a bit overpowered anyway -  or you can use 2/5, like BX does to MU BAB, instead). Rangers, bards, elves, etc, can do the same. Thieves use level/4. Always round to the nearest number (round 0.5 down).

Let us say you either choose a one primary skill (defined by your class), two secondary skills, and three tertiary skills, and you're ready to go. Spell-casting "counts" as one type higher (as it includes not only the bonus but also the ability to do what others simply cannot).

For example, we could have:

And for each of those, choose a few more skills to complete the set. A fighter could either have Nature, Riding or Leadership, depending on his traits and background.

The coolest thing about this system after some fleshing out a little while is how easy it would be to create your own class or sub-class by simply trading one skill for another. Paladins, Mountebanks, Cavaliers, Assassins... they would all fit nicely. You could even play with the numbers a little bit, combining two Tertiary skills to create a 2/3 skill, allowing for 3/4 fractions and so on. As long as all the fractions add up to 3, for example. I wouldn't use this for NPCs, though, since the whole point is making things simpler.

(If you're asking yourself why I don't use a bunch of charts instead, well, I am not a fan of charts to be honest; I prefer simple formulas most of the time; I find that they are easier to grasp and to play with. If you dislike fractions, well... I bet you'll skip this one anyway). 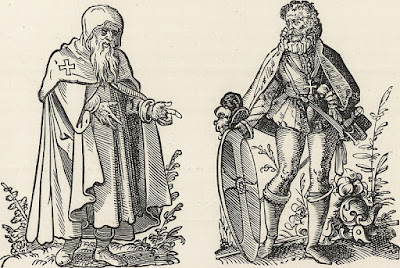 Enough about skills. What about ability bonuses? Shouldn't NPCs have those?

Well, if you use 3d6 in order, you don't really need to give any bonuses to NPCs, since PCs get few of those anyway. If you use 4d6 (or something) and want to level the playing fiel, you might give NPCs a few bonuses (distribute +6 around the six abilities).

In my case, I prefer to increase abilities as the PCs level up, which makes things a bit trickier. But I have a simple formula for that too. I use 60+level as the total for PC ability scores, but that is still too fiddly when creating an NPC on the fly. Instead, just add a total of modifiers equal to L/2.

A level 12 thief would have something like +3 Dexterity, +2 Intelligence, +1 Constitution and Strength, and -1 Charisma. And so on. If you want a particular NPC to have some special power, it "costs" one ability point. In any case, barring special circumstances, the biggest bonus should go to Strength for fighters, Dexterity for thieves, etc. All very intuitive.

In a nutshell, I think saying someone is a "Fighter 8" or "Cleric 5" is all you need to know about most NPCs. Even if I have to choose some numbers on the fly.