I spend a significant amount of time "fixing" the stuff I dislike in D&D. From time to time, I find something that reminds me that there is nothing new under the sun. It seems that most of the possible variations were created in the few years that followed the publication of D&D, and subsequent editions just adopted one or another without really innovating that much.

Case in  point: the PrinceCon 1978 D&D variant rules. I heard about it from Jeffro Johnson, here; he pointed me to the rest of the books (here). 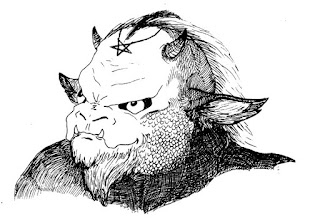 - An elegant "bell curve" of sorts for STR over 18, without using percentages.

- An efficient solution for ignoring level limits to demihumans - "At any level after a character would normally be pinned, the increase in experience for the next level is doubled". Os, as I would like to put it, they suffer a 50% tax to XP after reaching maximum level.

- Bonuses to abilities based on race/class.

- An alternate combat system, using the d%, and a formula for grappling I will not try to decipher.

- "Designer notes" of some sort:

- The cool art that illustrates this post (credited to Joan Smith and Wanda Lee).

Its well worth checking out. 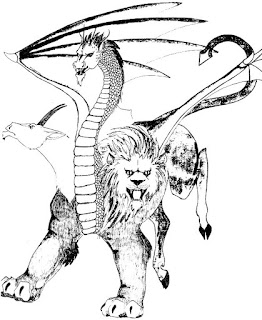 The interesting thing (other than the whole concept of the Con, which looks awesome) is how many cool alternate rules they had in 1978; not for publishing their own RPG, but for playing D&D in that particular weekend. Of course, they would use something similar for other conventions and the rest of the year, but I found it impressive nonetheless.

I am very fond of old school house rules such as these, the Perrin Conventions, etc. Reading them makes me feel like house ruled games where the norm in the first days of the hobby; here is a great post about the subject.

I kinda regret taking so long to realize that games are meant to be house-ruled; many of the gripes I had with my favorite games could be easily fixed if I knew fixing the game was a necessity.

Granted, I played GURPS for a long time, and although it seemed really perfect and complete on the outside, combat was quite boring and skills were too fiddly. Easily fixable with a d20 and the "Bang! skills" it eventually adopted. But I got bored before fixing it. Which was good, I guess, because it brought me back to old school D&D - in my GURPS days, believe or not, I thought D&D had became too complex and unrealistic (it was 3e at the time).

The funny thing is that when played simpler systems, it was quite obvious that more rules would make the game better (for my tastes anyway), but maybe I forgot the fact after moving on to "crunchier" stuff.

Nowadays, of course, I think everything (D&D or not) is basically just someone else's house rules. Even Greyhawk might be viewed this way (it is a "Supplement" after all) , which might explain why each new retro-clone or neo-clone that comes around has its own version of the Thief.

And why I want to write my own version, of course. So stay tuned if you want to read about a new  skill system and alternatives to your current saving throws and magic spells! If you like house rules as much as I do, there might never be enough.
Postado por Eric Diaz às 3:58 PM