The ability flower of D&D

I've been thinking of this image lately. It's something I came up with when considering D&D abilities. I remember there was an RPG with a similar concept, but I cannot remember its name (let me know if you do). I think it was an original system, not D&D based. But here is what I'd do for D&D: 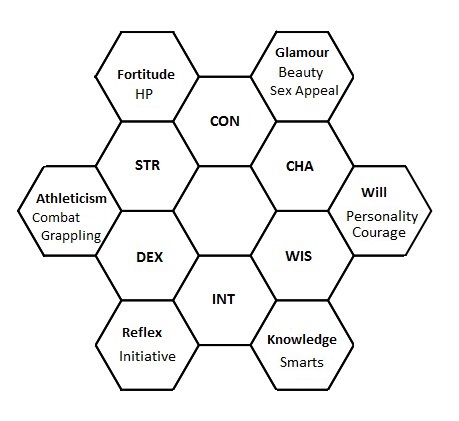 We all know the six abilities in the inner hexes; I call the other six "secondary abilities". They are (for the lack of better names): Fortitude, Glamour, Will, Knowledge, Reflex and Athleticism (I assume you're familiar with Reflex/Fortitude/Will as saves).

And here is what they do:

Fortitude: in addition to being a save, it defines your HP. Strong characters are automatically tougher. You could probably get rid of the concept of different hit dice: fighters and barbarians would automatically have more HP. This is the most obvious one, since we can hardly think of an archetypal character that manages to be both incredibly strong AND frail, or incredibly though but weak at the same time.

Glamour: being healthy and charismatic might mean that you are attractive. "Glamour" is a nice word for elves and fairies, I think. But this is the hardest ability to work with, because Constitution and Charisma can be seem as opposites in D&D, and I do'nt think there are many monters in D&D you can fight with beauty. It is curious that "Comeliness" was, IIRC, the first ability to be added after the original six.

Will: in addition to being a save, it measures your courage and force of personality. People might follow you because you're wise, or because you're charismatic... or maybe both.

Knowledge: the ability to know stuff and put it to practice. Book learning combined with common sense. It might be obvious that real life "wisdom" is a combination of intelligence and knowledge.

Reflex: in addition to being a save, it can be used for initiative. It means that you think fast, and probably can act faster than other characters - or even predict their actions.

Athleticism: most real-life sports - and ESPECIALLY combat sports - rely on Strength AND Dexterity. You certainly need BOTH to use a longbow, rapier, or two-handed sword. More about that here.

In 4e, Reflex/Fortitude/Will were tied to THE BEST of two abilities. 5e does the same with Strength, Dexterity and combat: you use your best one to attack and defend.

This is not a great idea. In practice, it means that you can "dump" one of the abilities in favor of the other. So, in 4e, a strong character has more reasons to have low Constitution - which is counter-intuitive - and in 5e fighters are encouraged to have low Strength OR Dexterity, but not both.

So, my alternative would be making secondary abilities an average of two primary abilities. They could be raised separately through feats. But here is the twist: it would be very easy (through a feat, class feature, etc.) to use a secondary ability instead of a primary one - specially for skills - as long as it makes sense.

So, the primary ability would ALWAYS be important - but not necessarily mandatory.

Example: a wizard with Intelligence 18 (+4) and Dexterity 14 (+2) would have Reflex +3, and would be able to use it for initiative - and maybe even firearms!

As you may realize, this might have lots of interesting effects in D&D (and specially 5e)

- Combat and Dexterity being both important for combat, and specially grappling, at the same time.
- More muscles means more HP.
- Intelligence becomes more useful for non-casters because of initiative.
- Both the cleric and the wizard (Wisdom and Intelligence) could be proficient healers and scholars.
- Clerics are automatically good at the Religion skill.
- Leaders could rely on Wisdom, or even Constitution, instead of Charisma.
- You can be brave and unwise at the same time (not uncommon in the real world!).
- The wizard might be bad at dodging a sword, but smart enough to avoid the worst part of a fireball.
- All abilities become equally important to saves.

In short, it allows a number of interesting archetypes that are discouraged in 5e:

- The paladin that is not charismatic, but tough.
- The strong rogue.
- The fighter who is both strong and agile - or maybe just a strong archer.
- The scholarly cleric.

Well, this is all just a thought exercise. In reality, adding six abilities to the game might make things more complicated than necessary.

But I like the concept of using alternate ability scores. Well, this is ALREADY an optional rule in 5e - but, if used freely, will encourage MORE dump stats. So, off the top of my head, I would make this as an alternative to muti-classing if you have an ability score equal or greater than 13. Create a feat if you have to.

Alternatively, you can use these concepts simply as inspiration when deciding if an alternate combination of ability and skill is viable... or if your PC looks good.
Postado por Eric Diaz às 4:19 PM