I've watched glimpses of Disney's Raya and the Last Dragon this weekend. This is not a full review, I've watched barely fifteen minutes in total. From what I've read, it is not as cool as Moana, although it is reminiscent of it (I think it is the same studio or something). Anyway, the kids liked it. 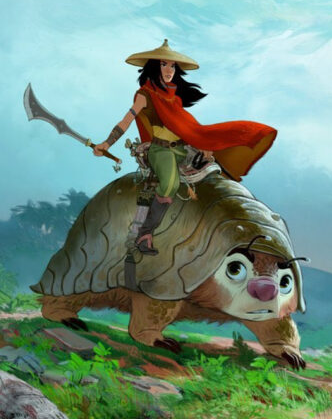 But the world-building is somewhat interesting. No, really. Extinct dragons, ravaged lands, floating markets, warring nations (The Last Airbender-style) endless people being petrified by a mysterious plague, sword-whips, and mounts that are a combination of pill bugs and dogs (while other nations ride giant tigers). Reminds me not only of Frozen and Moana but also of Dark Sun and The Three-Body Problem. Anyway, go watch the trailer and you'll see what I mean.
(BTW, I haven't watched The Last Airbender is any version. I'd guess it has more interesting ideas and a better plot, but I couldn't tell).
Disney's specialty is gathering great public domain stories - starting with Brothers Grimm etc. but now encompassing folklore from all over the world - bowdlerizing all of it, adding some cool stuff, and then defending "their" IP with tooth and claw. In addition to some allegations about the filming of Mulan that I won't discuss here - since I have limited knowledge about this - but it certainly turned me off from the movie and cast a grim shadow over the whole enterprise.
So, as a company, Disney is pretty similar to Smaug defending "his" treasure. Which might be realted to the reason Tolkien never allowed a Disney version of his books. But I digress.
The nice part about all of this is the "adding some cool stuff". They have some great and decent writers, and they come up with good ideas, even when it is all bowdlerized and infantilized for mass consumption (of course, they also have GREAT movies, mostly form Pixar, in addition to marvelous animation).
And, somehow, the worst movies seem to have the best ideas. Moana has a great pacing and story - Campbellian to the core - but it doesn't inspire me to actually add stuff to my games. Frozen, on the other hand, has a pretty interesting villain (Elsa), despite not being a great movie (the sequel is even worse from what I've seem). Rapunzel is also mediocre and gave me some ideas about magic flowers and so on.
I have no idea why is that.
I think what I'm trying to say is... getting classic stuff from folklore, then adding new elements to it, and adding a dark twist on top can be the fodder for great ideas. We've seem it in The Witcher, for example, and also in Fables. I've been tempted to writing my own version of a "dark fairytale" setting for a while (this in only one example; I wrote a few short stories about a shoemaker who enslaves elves, about  a a hunter and a little girl (both with their own beasts inside), and about a prince who wants to cut a mermaid in half for... reasons. Of course, you'd have to be extremely careful to avoid using actual Disney stuff, but since most of the material is PD anyway, shouldn't be hard to circumvent their lawyers (who probably have bigger stuff to take care of).
Anyway, this is all I've got for today. I hope you have a great week!
Postado por Eric Diaz às 12:01 PM