Old School Feats got a new review over Pseudonym Writes. You can read the whole thing here. Here is the conclusion:

SHOULD YOU BUY THIS BOOK?

If you’re part of the core target audience – people who want a way to spice up a game if B/X, OSE, Labyrinth Lord, or some other retroclone that sticks very closely to the original rules – then yes, absolutely. It’s a great upgrade to those systems in my opinion.

If you’re already committed to another OSR game … maybe. It’s only $5, there are definitely some cool system-agnostic ideas in here, and won’t take that much hacking to get it to work. Even if you’re playing a non-OSR D&D game (or D&D clone), there are some ideas in here that will likely work in your system, and it’s worth thinking about.

If you’re looking for something that will run perfectly out of the box with zero balance issues or duct-taping required to make it work, then no, probably not. Even if you’re running a B/X game. It’s simultaneously very fuzzy and loose in some places and hyper-specific in others. But if that’s what you want, why on earth are you playing a B/X clone? D&D was never balanced right out of the box.

Overall, I think it was a very fair review, even the criticisms.
OSR feats does not fit perfectly to non-B/X systems - I don't think it would be possible to create a book of feats that worked for both Knave and The Black Hack, for example, so I chose to stick with a single system (which happens to be my favorite, and also the most popular right now IMO - since it is very close to OSE, LL and BFRPG). But, as he says, the ideas are adaptable for other systems.
I also agree that it is not perfectly balanced. I do think, however, it IMPROVES balance when compared to baseline B/X (which is an issue the review addresses in the last sentence). 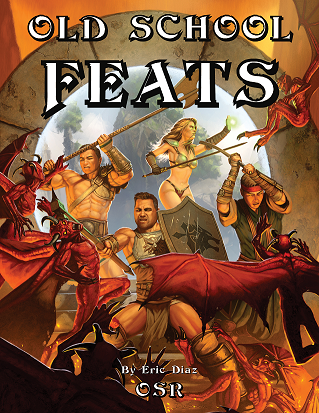 Finally, the book was indeed written with a great effort to be perfectly compatible with B/X, using existing classes, skills, mechanics, etc. I avoided adding new mechanics or more complexity. I DO think it is possible to improve some aspects of B/X, however, and I've already written a system with this in mind (Dark Fantasy Basic).
TBH, I'm a bit torn on these two approaches: keep things perfectly compatible with B/X, to reach a wider audience, or do my own thing, changing every bit of old school D&D to better suit my needs and to make a complete, coherent game of my own, mixing B/X, OSR, and modern stuff.
Let's see. For now, I'm tackling races. In 2023, I might do something more ambitious: either an entire book of B/X options or a coherent Dark Fantasy Compendium. Let me know if you have a preference for either one!
Postado por Eric Diaz às 10:42 AM