Here are some of my April 2022 Highlights. The first one is quite negative - you've been warned! 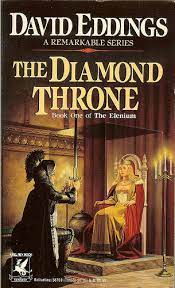 This book is remarkably lame. I have no idea why I bought it in the first place; I probably heard the name of the author in something related to D&D, or some fantasy best-seller list. I've been underwhelmed by the fantasy novels I've been reading lately, but this one is specially dull: not a single cool monster, story, or idea I could identify. The characters are not especially interesting either. I should have given up halfway through but I'm guess I'm too stubborn for my own good.
The book begins with some version of the Nibelungenlied (*ahem*) and then goes on to tell a story of a brave "Pandion" knight (i.e., paladin) name Sparhawk (*ahem*) that has to find a cure for his Queen's malady... And then he goes from place to place talking to people for the next clue in a quest that goes nowhere.
The heroes use various ridiculous disguises and ruses throughout the book and foil every plan by the villains. The dialogue is puerile, as the jokes and situations - even when the heroes are confronting the antagonists face to face, they behave like brats. I thought I was reading some YA novel until one of the bad guys suggests beheading and sexual violence.
But nothing actually happens. No important characters die or get hurt, no big twists or surprises, nothing. No shades of gray either - the heroes are noble and brave (at most, they are likeable thieves and adulterers), the villains are greedy and power-hungry, and that's it.
This is well below The Witcher. If you want something light-hearted, but funnier, try Kings of the Wyld (assuming you've already read the classics - if you didn't, go read Tolkien, Lieber, Dunsany, Moorcock, etc.).
I am not likely to read other books by the author and I'm certainly not reading the rest of the series. I've read the summaries - everything goes exactly as expected.
The Last Duel (2021 film)
This one was decent. It is basically the French-medieval version of In a Grove with some knight-fighting thrown in for good measure. The acting, cinematography, dialogue, etc., are all very good. It gets a bit repetitive and tedious - the story is not nuanced enough to be told three times - but it is really remarkable in showing the medieval point of view of the characters, instead of trying to shoehorn them in modern archetypes and sensibilities. I.e., the characters spend the movie trying to defend their (perceived) rights, as they see fit, in their context.
Also, if you care about this stuff, there is some good sword fighting and mass combat. Sometimes they use their swords as bats and other silly stuff, but overall the battles are bloody and realistic. I enjoyed it.
Raised by Wolves (2020 TV series)
I've only watched the first six episodes of the first season, them a summary of the rest (until the end of the second season, which got even better reviews than the first). The series is good but I've ran out of patience and time (I'm sorry if I sound grumpy today!).
Coincidentally, it is produced by Ridley Scott, the director of the Last Duel - who also directs the first couple of episodes here. Although it is mostly written by someone else (Aaron Guzikowski), it looks very much like a mix of Ridley Scott movies - especially the Alien franchise (including Prometheus), but also Blade Runner and Kingdom of Heaven.
Once again, the acting and the visuals are superb. The story is interesting - a couple of atheistic androids trying to raise humans in an inhospitable planet, until they got found by space-zealots, and so on. It is science fiction so deep into Clarke's Law that it becomes entirely fantastical, and often surreal. It is very violent and it kills dozens of characters per season (and there are not that many characters to begin with, but they introduce new ones as they go).
I'm guessing you'll like this one if you liked Prometheus, and MAYBE if you like the other movies I've mentioned. A bit slow and at times I doubt it is going anywhere but worth checking out if this piques your interest.
Postado por Eric Diaz às 8:09 AM